The sensor-based system—a cheaper, easier alternative to smart pigging—is coming together at the Deakin Corrosion Research Centre, where the sensors were developed.

Working with a $1 million grant from the Energy Pipelines Co-operative Research Centre, the center will shepherd the sensor technology through a three-year development process leading to commercialization.

The work will include extensive modeling of corrosion under disbonded coatings. 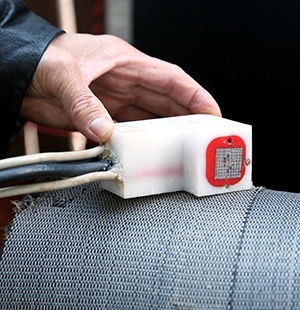 deakin.edu.au
The Deakin Corrosion Research Centre sensor will provide continuous monitoring and predict years ahead when and where corrosion is likely to occur.

"Pipelines are a multibillion-dollar asset within Australia," said Mike Tan, co-director of the Deakin center.

"They were designed to last for 30 to 40 years, and many of Australia's oil and gas pipes are near the end of that timeframe, but the companies would face huge difficulties and expenses if they were to replace them," Tan said.

The new technology will help the industry achieve its "dream" of economically extending the operating lives of pipelines to 100 years.

Currently, smart pigging is commonly used to detect corrosion, Tan said. However, it is expensive and usually carried out only at five-year intervals.

"The sensors will play an important role in complementing that technique, with a focus on the outside of the pipes, where most of the underground pipeline corrosion tends to occur," said Tan.

The sensors will be able to be placed in the ground, near the outside of the existing pipes, and will provide continuous, real-time monitoring of the efficiency of cathodic protection, coatings and corrosion.

The sensors will allow the monitoring, modeling and prediction of when and where corrosion damage could likely occur in future years. They will use wireless or satellite technology to alert companies when issues occur.

According to Tan, the sensors can be designed for oil and gas pipelines, underwater pipes, desalination plants, bridges, large structures, or even submarines.