MILWAUKEE, WI—A former Shell Pipeline Company corrosion coordinator won't spend any time in prison for lying about his negligence, which led to a pipeline leak that released over 9,000 gallons of jet fuel from a Wisconsin airport.

Instead Randy Jones, 44, of Houma, LA, was sentenced in federal court to five years of probation and ordered to pay $19,377,785 million in restitution, the U.S. Attorney's Office for the Eastern District of Wisconsin announced Thursday (April 30).

Jones, a former onshore corrosion coordinator for Shell Pipeline Company L.P., pleaded guilty in November 2014 to two violations of the Pipeline Safety Act and one charge of making false statements to the U.S. Department of Transportation's Pipeline and Hazardous Materials Safety Administration (PHMSA). 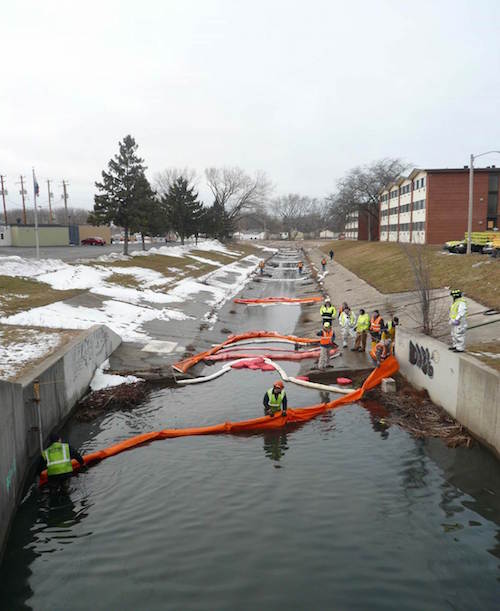 Photo provided by Wisconsin Department of Natural Resources
Randy Jones, a former onshore corrosion coordinator for Shell Pipeline Company, was sentenced to five years of probation and will pay $19.4 milion in restitution after pleading guilty to failing to conduct readings and entering fraudulent data for a pipeline that leaked over 9,000 gallons of jet fuel at a Wisconsin airport.

Jones had agreed to pay the $19,337,785 in restitution—the cost of the cleanup—when he pleaded guilty in November. However, Jones also faced a maximum sentence of five years in prison for each charge.

Jones worked for Shell from 1992 to 2012. From 2010 to 2012, his role was onshore corrosion coordinator. He was based in Louisiana but was responsible for the Shell pipelines servicing General Mitchell International Airport (MKE) in Milwaukee, WI,  and Chicago O'Hare airports.

From January through December 2011, Jones failed to conduct the readings and the survey, later entering fraudulent data into a computer system when he learned PHMSA had scheduled an audit of the pipeline, according to court documents.

In January 2012, a hole was discovered in the pipeline after jet fuel began showing up in the soil surrounding the airport and Wilson Creek. About 9,000 gallons of jet fuel was released from the pipeline.

His attorney, Eduardo Borda, proposed a year in prison, but Shell said that probation would suffice—and allow Jones to start paying back the $19.4 million in restitution. U.S. District Judge Rudolph Randa agreed with Shell, and sentenced Jones to five years of probation, WTAQ.com reported.

Jones now works for another pipeline company in Louisiana.

Jones told Randa that was embarrassed and ashamed, but felt "overworked and overwhelmed" in his role as onshore corrosion coordinator, the Journal Sentinel reported.

"I tried to do too much and failed," Jones said.

In a sentencing memo, Borda wrote that "pride and an inability to admit he was in over his head" caused Jones to neglect his work duties and later make false statements to conceal that negligence.

The prosecutors said Jones was well aware of the serious environmental and safety risks posed by pipeline failure.

According to the prosecutors, Jones told agents from the U.S. Environmental Protection Agency that in "the back of my mind, I knew someone would get hurt."