Launchers often have a limited useful life, as deploying missiles at a high speed from fighter aircraft can cause wear and gouging. Pre-coating the rails, or conductors, of a missile launcher can significantly delay the onset of wear, researchers say. 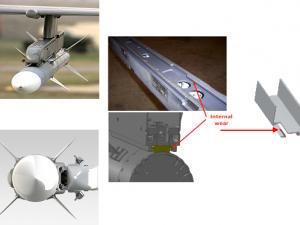 sbir.gov
Missile launchers (left) have a limited useful life, as deploying missiles at a high rate of speed can cause wear and gouging on the rails. An artist's depiction shows how the new coating is being used to address wear issues.

While the present coatings are designed to have a five- to seven-year flight life, they often last for les than a year, adding significant costs for inspection, reapplication, and removal and replacement of old rails.

The new coating is also greener than the current technology, which includes anodization, primer and a solid film lubricant. Anodizing uses chromic and sulfuric acid, which produces hazardous byproducts, such as sulfuric acid fumes and aluminum hydroxide.

The PEO process uses "a controlled high-voltage alternating current that is applied to a metal part submerged in an electrolytic bath," according to IBC Materials and Technologies Inc., which performed the research under an Air Force Small Business Innovation Research contract with the Air Force Laboratory's Materials and Manufacturing Directorate.

"Anodizing has been the standard protective coating for aluminum and other light alloys for nearly 100 years," explains Dr. Soloman Berman, an IBC researcher.

The hazardous byproducts produced by the process "require costly cleanup and remediation processes," said Berman. "As a result, many world organizations, such as the European Union, are taking steps to eliminate its use."

The high voltage and current create an intense plasma on the surface of the metal. The plasma oxides the surface and grows into a nano-structured ceramic oxide layer from the substrate material, IBC explains.

The oxide film is produced by subsurface oxidation, resulting in a process that can produce thick coatings of varying porosity. According to IBC, the process can readily grow coatings up to 250 microns thick, with research showing the possibility of up to 500 microns.

IBC, also known as IBC Coating Technologies, is a privately owned company based in Lebanon, IN, with an expertise in surface engineering.

IBC has also demonstrated the coating is compatible with a wide variety of additive manufacturing repair technologies, such as thermal spray, friction welding and laser cladding. PEO layers on additive repairs zones perform identical to coatings on the original aluminum alloys, the Air Force says.

The coatings have been qualified for the LAU-12X Advanced Medium Range Air-to-Air Missile (AMRAAM) missile launchers on F-15, F-16, F-18 and other aircraft platforms.

The PEO coating entered full production on several of these parts in late 2014 and is currently being scaled to handle even larger parts, such as the full nine-foot LAU-12X rail structure used on F-15, F-16 and F-18 aircrafts.