HAMPTON, VA—Souped-up coatings that can make aircraft faster, cleaner, cooler and more colorful are taxiing for takeoff under private and public developers.

At NASA Langley Research Center, testing is underway on a handful of coatings designed to debug planes—literally, not electronically. The goal is to keeping masses of insects from sticking to jet wings, which increases drag and slashes fuel efficiency.

NASA's non-stick coatings are one of two experiments designed to help reduce fuel consumption and emissions. The other features 31 small devices that will blow jets of air on the plane's vertical tail. 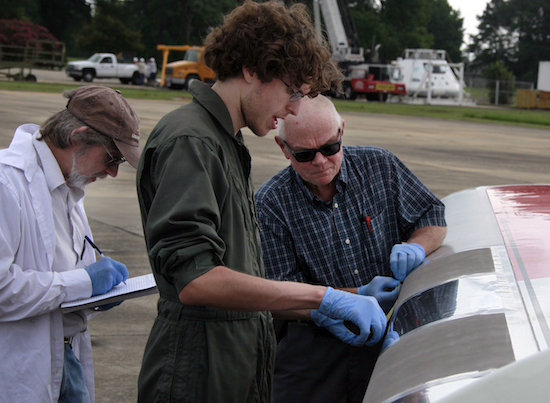 The experiments are part of eight large-scale Environmentally Responsible Aviation (ERA) integrated technology demonstrations being conducted in 2015 that will bring NASA's ERA project to a close.

ERA was launched in 2009 to explore and document the feasibility, benefits and technical risk of vehicle concepts and technologies to reduce aviation's impact on the environment.

"Both are designed to improve the air flow over the surface and ultimately reduce drag," said Fay Collier, manager for the NASA Aeronautics Research Mission Directorate's ERA Project.

When masses of insects cover an airplane's wings during takeoff or landing, the bugs disrupt the smooth flow of air over the wings, creating more drag.

Five different coatings designed to repel insect residue will be tested on Boeing's ecoDemonstrator 757 in a series of flight tests near Shreveport, LA—a location selected as the best bug-infested area.

Selected from a list of 90 airports, Shreveport was also chosen for its runway length, temperature, humidity, thunderstorm frequency, and ability to handle a 757 aircraft.

Engineers at NASA's Langley Research Center in Hampton, VA, previously developed and tested a number of these coatings in a wind tunnel and on the wing of a NASA Langley jet. The best candidates are now advancing to the next round.

NASA's ERA project will assess how well the coatings work in an experiment called "Insect Accretion and Mitigation."

During 15 planned flights, researchers will install sections of coatings onto the leading-edge slats of the ecoDemonstrator 757. First, they will establish a baseline using uncoated surfaces to capture insect accumulation rates. Then those sections will be removed, and samples of five treated panels will be installed.

Engineers want to test how durable the coatings are, and treated surfaces will be considered effective in reducing drag only if they can withstand the harsh flying environment.

"Solutions to reduce fuel use by one or two percent may not sound like much," Collier said. "But shaving aircraft fuel consumption even a few percentage points can save millions of dollars and help protect the environment from harmful emissions."

Cooling from the Outside In

The technology is based on the development of novel pigment dispersions that increase transmittance of near-infrared energy, or heat, through a dark coating and increase the subsequent reflection from a white underlayer.

The techology is modeled after the egglant, which remains naturally cool to the touch even when exposed to intense sunshine, said Mark Cancilla, global director for aerospace coatings.

The eggplant's dark purple skin does not absorb near-IR radiation but transmits it to the white interior flesh, where it is reflected and transmitted out through the skin, according to PPG.

"Airlines often avoid dark colors for airplane liveries because they can absorb as much as 90 percent of solar energy, which in turn heats the interior while a plane is on the ground," said Cancilla.

"Our innovative technology means airlines no longer have to avoid dark colors. In fact, the darker the color, the greater the difference there is in total solar reflectance. There is no compromise of other coating properties."

Cancilla said the coating system was being evaluated by several airlines and aircraft manufacturers.