The parent company of Carboline, Rust-Oleum, Stonhard and other leading coating and construction materials brands reported a net loss of $57.35 million for the quarter ended Feb. 28, compared to net income of $16.22 million in the prior-year period, according to a release issued Wednesday (April 8). 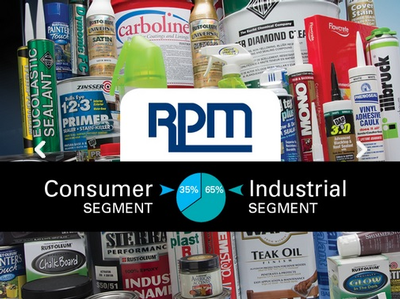 RPM Inc.
Based in Medina, OH, RPM is a holding company that owns dozens of subsidiaries that produce sealants, coatings building materials for industrial and consumer markets. The company reported its third quarter results Wednesday.

Excluding the charge, as-adjusted net income for the quarter rose sharply—by 61.2 percent—to $26.2 million, or $0.20 per diluted share, according to the company.

The drop in income overshadowed a climb in sales for the quarter. The Medina, OH-based company saw a 9.6 percent increase in net sales for the third quarter. Sales were $946.4 million, up from $863.4 million in the same quarter a year earlier.

RPM said the $83.5 million charge was for a tax accrual related to “possible repatriation of overseas earnings to fund remaining obligations” in its SPHC (Specialty Products Holding Corp.) settlement.

The May 31, 2010, bankruptcy filing allowed SPHC to develop a plan to permanently resolve hundreds of millions of dollars in asbestos claims related to Bondex.

The plan included the establishment of a $800 million 524(g) trust to assume the current and future asbestos personal-injury liability claims and absolved SPHC and Bondex from any further asbestos liability.

An initial $450 million payment was made to the trust using funds from RPM's revolving line of credit in December.

While SPHC and its operating units continued to be owned by RPM during the bankruptcy process, their financial results were not included in RPM's consolidated results.

"We are delighted to have these great management teams and companies back in the fold at RPM,” said Frank C. Sullivan, chairman and CEO.

“During the period while they were deconsolidated, they demonstrated significant organic growth with current-day sales of more than $400 million on an annualized basis and developed some very exciting new products.”

Sales for the company’s industrial segment were $620 million, a 10.6 jump from same period a year ago. Acquisitions added 12.4 percent to the sales total, while “organic” growth accounted for 5.5 percent.

The reconsolidated SPHC businesses, all of which are in RPM’s industrial segment, are included in acquisition growth, the company reported.

Foreign currency negatively impacted sales by 7.3 percent. Industrial segment EBIT for the quarter, including $5.0 million in stepped-up inventory expense from SPHC, was $18.2 million, a 19.6 percent decline from EBIT of $22.7 million a year ago.

"Results from our industrial segment have been mixed,” Sullivan said.

“With 50 percent of this segment's sales outside of the United States, the rapid strengthening of the U.S. dollar against virtually all other currencies has created significant headwinds. Europe, our largest overseas geography, was nearly flat in revenue growth in local currency.

“Our U.S. industrial businesses are performing quite well, with most of them enjoying double-digit sales increases in the quarter."

Sales in RPM's consumer segment increased 7.8 percent to $326.4 million in the third quarter compared to the prior year. Organic sales increased 9.1 percent, while acquisitions added 1.2 percent.

Foreign currency negatively impacted sales by 2.5 percent. Consumer segment EBIT was $35 million, a 13.9 percent increase over a year ago.

“Our consumer segment performed well in the quarter, which is consistent with the gradual improvement in residential housing, consumer confidence and discretionary spending,” according to Sullivan.

“The segment's performance was also positively impacted by the introduction of several new products for the spring season.”

"We continue our search for strong acquisition candidates that complement our existing product lines and expand RPM's geographic presence, as reflected in the Rust-Oleum Group acquisition of Spraymate Group in South Africa, which took place subsequent to the end of the third quarter," Sullivan said.

Looking ahead to fiscal 2015, the company expects to be at the upper end of the current earnings guidance range of $2.25 to $2.30 per share, citing the anticipated benefit from the SPHC companies in the fourth quarter.

"For the fourth quarter of our fiscal year, we expect our consumer segment to benefit from continued innovation and consistent growth in consumer DIY spending. In our industrial segment, we do not see a near-term turnaround in the European economies and expect a very strong U.S. dollar to continue negatively impacting results," stated Sullivan.