A Pennsylvania lawmaker is challenging federal regulators on dueling rules that require Amish workers to wear hard hats in some industries but not others.

Rep. Glenn Thompson (R-Centre County) has asked the U.S. Department of Labor to review its requirement that Old Order Amish wear hard hats in mining areas—a requirement exempt in construction since 1978 under the Occupational Safety and Health Administration.

Thompson's request has reopened a public debate on religious freedom versus workplace safety in Pennsylvania and other states with significant Amish populations. 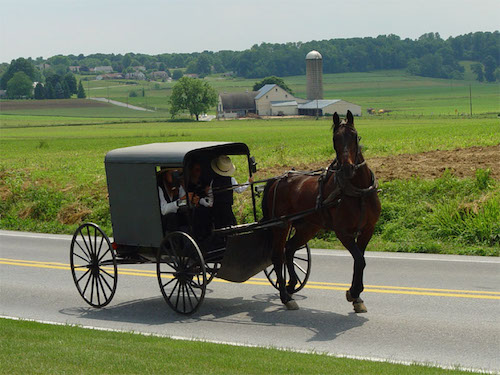 Otoomet /
"We want to put our faith in God, not hard hats," said Abe Byler (not pictured), an Amish quarry worker.

The Mine Safety and Health Administration (MSHA) has said it would not require Amish to wear hard hats in areas where there is little chance of falling objects, but it will not make an overall exemption like OSHA does for construction sites and other industrial settings.

The different standards make no sense to employers like Dan Russell, owner of Russell Stone Products in Grampian, PA.

"What's the difference if a piece of steel falls on your head versus a stone in our quarry?" asked Russell, who employs 16 Amish in his quarry.

Russell asked lawmaker Thompson to find out why hard hats were mandated in mining but not construction, TribLive.com reported.

All of his Amish workers signed waivers opting out of the safety gear, and Russell assumed that those waivers kept his company in compliance with the religious exemption allowed by OSHA.

But the federal mine safety rules, not OSHA regulations, apply to the quarry—and last year, Russell had to reassign workers who refused to wear hard hats.

'Faith in God, Not Hard Hats'

The MSHA's safety policy could potentially affect thousands of workers who hail from the 300,000 members of the Old Order Amish in 31 states and Ontario.

The style of the hats may vary, but all subgroups of the religion require men—and often boys—to wear them.

The idea is to refuse to conform to worldly dress and practices, explained Donald Kraybill, a senior fellow at Elizabethtown College's Young Center for Anabaptist and Pietist Studies.

"It's not a matter of personal preference or even tradition," said Kraybill, author of several books about the Amish. "For them, it has religious mandate and religious meaning.

"They don't want the loss of the hat in construction areas to lead to an erosion of wearing the hat elsewhere," Kraybill told Mcall.com.

Abe Byler, one of Russell's Amish employees, told TheHill.com, "We want to put our faith in God, not hard hats."

News reports said that Thompson sent a letter to U.S. Labor Secretary Thomas Perez about the issue last August but did not receive a response. Thompson then asked Perez again at a budget hearing March 18, and Perez responded within four days.

"There are two very compelling, competing considerations," Perez told Thompson, according to Mcall.com.

"I take a back seat to no one in my commitment to respecting religious freedom. But at the same time, workplace safety is a pretty big thing, too."

In a letter to Thompson, an MSHA official called mining a "high hazard industry" and the wearing of hard hats "clearly critical protection," according to media reports.

The mining agency notes that OSHA standards cover many industries and occupations, while MSHA standards apply to a single, "particularly hazardous" industry.

The dual rules have led to various accommodations.

The MSHA official said operators "may have the ability to accommodate religious beliefs by not requiring miners to work in locations where falling objects may harm them."

Russell said that he had had to move five of his Amish employees to another part of his operation, but that replacing them with non-Amish workers had been challenging.

"Our Amish workers are a very valuable asset to our company and I do not want to jeopardize our operation because of their religious beliefs," Russell wrote in a letter to Perez, TheHill.com reported.

"Is it the government's role to tell people how to practice their religion?"