Tomorrow's U.S. soldiers may be able to avoid detection, even from infrared cameras, thanks to the unlikeliest of bio-inspirations: squid skin.

Yes, the squid, Mother Nature's master of disguise, is guiding research at the University of California-Irvine that aims to develop coated "invisibility stickers" that could help hide soldiers from view. 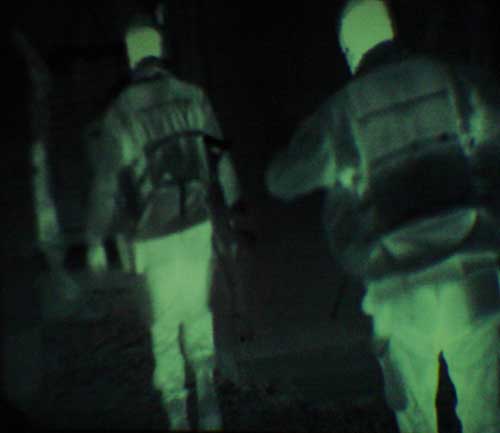 ©
Soldiers in camouflage-pattern uniforms "blend into foliage during the day, but under low light and at night, they're still vulnerable to infrared detection," says UCI's Alon Gorodetsky, Ph.D.

When so many current military and industrial applications employing infrared detection, developers say, the squid may just have the answer.

"Soldiers wear uniforms with the familiar green and brown camouflage patterns to blend into foliage during the day, but under low light and at night, they're still vulnerable to infrared detection," UCI's Alon Gorodetsky, Ph.D., explains in a research announcement by the American Chemical Society.

"We've developed stickers for use as a thin, flexible layer of camo with the potential to take on a pattern that will better match the soldiers' infrared reflectance to their background and hide them from active infrared visualization."

The stickers' secret ingredient is a protein called reflectin. Layers of the protein are found in cells called iridocytes on the squid's skin. Using a "biochemical cascade," the squid can change the thickness and spacing of the protein layers, changing how the cells reflect light and show color.

Unwilling to slaughter squid in the name of his invention, Gorodetsky and his group developed a way to produce reflectin from bacteria and then coated a hard substrate with the protein. To trigger the light-reflecting changes, the team initially tried acetic acid vapors,"essentially exposing it to concentrated vinegar."

Effective but impractical for field use, the vinegar vapors were backburnered in favor of a reflective film or tape, which can stick to uniforms and other surfaces. The trigger in this iteration is mechanical—stretching.

The team is "continuing to tweak the materials" to work at mid- and far-infrared wavelengths, ACS said.

One day, Gorodetsky hopes, soldiers and security personnel can carry a roll of invisibility tape into combat.

With the tape capable of adhering to a variety of surfaces and its reflectance adjustable, "we can endow common objects with any shape or form factor with tunable camouflage capabilities," the team writes.

The project takes "a key step toward the development of wearable biomimetic color and shapeshifting technologies for stealth applications," it says.

"You take out this protein-coated tape, you use it quickly to make an appropriate camouflage pattern on the fly, then you take it off and throw it away."