Three construction workers were killed and another was injured Monday (March 23) when scaffolding collapsed at a high-rise construction project in downtown Raleigh, NC, according to authorities.

A portion of a mast climber scaffold, holding at least three workers, detached from the 11-story glass and steel Charter Square building about 11 a.m. and landed in a parking lot below, reports relate.

A 911 caller estimated that the workers had fallen 200 feet.

Authorities have identified the victims as:

Another worker, Elmer Guevara, 53, was said to have suffered serious injuries. 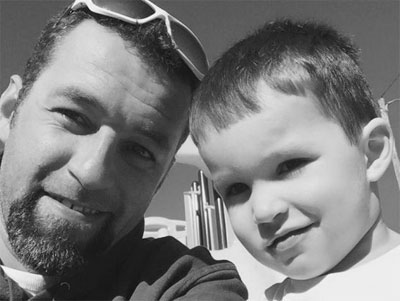 WRAL.com
Anderson Almeida, 33, of Durham, shown here with son, Ryan, 3, was one of the victims in the Monday (March 23) morning scaffold collapse.

Two of the victims had young children, according to a local ABC television affiliate.

North Carolina’s Department of Labor and other agencies have launched investigations into the collapse.

Meanwhile, work has been temporarily suspended at the mixed-use jobsite, according to the developer.

As of Tuesday (March 24) morning, authorities had not released information about where the workers were on the jobsite or what they were doing.

However, the chief operating officer for the project’s general contractor, Atlanta-based Choate Construction, told the News & Observer that a subcontractor, Associated Scaffolding, had been dismantling pieces of the scaffolding, called mast climbers.

“We don’t know what happened, but it occurred in the process of dismantling the climbers,” Mike Hampton told the newspaper.

The climbers were being used to transport crews and materials to different positions on the building’s facade.

“Our first and primary concern is for these personnel and their families,” Choate Construction said in a statement. “We request your thoughts and prayers at this time.”

Associated Scaffolding, headquartered in Durham, said on its website that it was "mourning" the tragic incident and working with OSHA to determine a cause.

OSHA records show that Choate Construction, founded in 1989, has been inspected more than 40 times in the last five years and has been cited twice.

One of those cases involved an excavation hazard for which the company paid a $1,200 fine. The other involved an other-than-serious violation for flammable and combustible liquid hazards, but did not result in any fines.

Associated Scaffolding, founded in 1947, does not have any recent OSHA cases.

A 911 caller reported that the men had fallen more than 200 feet to the ground, according to WRAL.com.

LeRoy Kelley, of Raleigh, who was also working at the site, told local news outlets that the three workers had been dismantling the scaffolding frame and were descending the side of the building when something went wrong.

Kelley said he had been under the scaffolding doing concrete work when he heard a popping sound and someone shout, “Run!”

As he heeded the warning, he heard a massive crash.

'That Could Have Been Anybody'

Another witness, Peter Thurston, said he had been working inside the building when the accident happened.

He told the Associated Press that he had run outside to try and help when he saw three men, wearing fall protection harnesses, among the mangled scaffolding.

Thurston said Guevara had been found inside a nearby portable toilet.

Another co-worker inside the building said he had reached out to grab one of the workers on the scaffold and was left with a scratch on his arm, WRAL reported.

Following the incident, dozens of construction workers gathered together to console one another, reports say.

The $54 million Charter Square project is being developed by Dominion Realty Partners LLC.

The developer offered condolences to the victims and families on its website and said work at the site had temporarily been halted for the investigation.

Raleigh Mayor Nancy McFarlane also offered a statement of condolence on behalf of the City Council.

The incident happened a week after a partial collapse of project scaffolding ripped apart by high winds in downtown Portland, OR.  No workers were on site at the time, and no injuries were reported in that incident March 15.