Suit: Work Went on Amid Drowning

"Nobody went in to the water to assist" two bridge construction workers who were tethered to a lift that ended up in the Brazos River, a new motion in a suit over the accident alleges.

Terry Watson, of Derr & Isbell Construction LLC, was under the "freezing" water for one minute and 48 seconds before managing to orient himself and reach the surface, says the motion involving the January 2014 fatal construction accident at Baylor University. 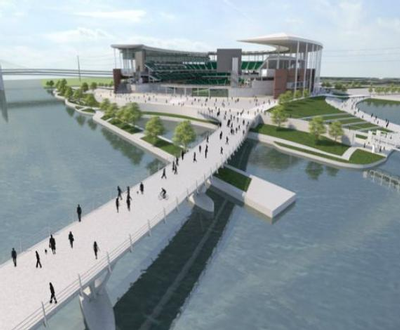 Austin Flintco
The $9.1 million pedestrian bridge over the Brazos River is part of Baylor University's $266 million McLane Stadium project. Four construction barges were in the river when a man lift accidentally drove off one of them and became embedded upside down in the river bed.

But Jose Dario Suarez, 55, who had also been tied off to the man lift, "never surfaced," the motion says. "Nobody went into the water to assist Mr. Suarez because the water was 'too cold.' In fact, no attempt whatsoever was made to rescue Mr. Suarez as he drowned."

The 50-page motion, filed March 6, in Texas state court, is part of a wrongful-death action filed in March 2014 by Suarez's widow, three children and mother.

The accident occurred during construction on a $9.1 million pedestrian bridge that is part of Baylor's new $260 million McLane Football Stadium.

Among the defendants are Baylor University, Derr & Isbell, lift manufacturer Genie Industries, and Flexifloat Construction Systems, which manufactured the floating barge where the lift had been stationed in the river.

The suit says the accident was caused by "misuse of multiple components of marine equipment," including a tugboat, the Flexifloat barge, the Genie lift, chains that were meant to secure the lift to the barge, life-saving equipment, and other items.

The victims' barge was one of four in the river for the project at that time. Because the work would occur over water, one general contractor had noted six months earlier in a memo that the construction would be "viewed directly from the school" and would be "on camera 100% of the time," the motion said.

New on the Job

The incident occurred on Suarez's third day on the job, although crews had been working from the vessels for two weeks, the motion said. The wind chill made the temperature 28.2 degrees and the water was "freezing cold," Watson told investigators later.

The accident came one day after a topping-out ceremony that was too windy to allow hoisting the last truss into place.

In trying to maneuver the lift closer to the target work area, Watcon drove the equipment beyond the edge of the barge and into the water, the motion says. Both Watson and Suarez were tied off at the time.

The lift left "fresh tire marks" that went "directly off the edge of the barge," a police officer said.

Construction cameras show the lift on the barge at 2:45 p.m. that day, but not in the next photo taken, at 4 p.m., the motion says.

A Waco police officer reported that work continued on the bridge as "Mr. Suarez's body lay on the bottom of the river trapped with the man lift," the motion says.

Bridge construction was later halted to allow investigators on the scene and to recover Suarez and the equipment. And stadium construction was then shut down by a Temporary Restraining Order.

However, the suit says, "Defendants viewed this disruption to be so significant that they arranged for an immediate emergency telephone hearing with the judge" who signed the order while he was traveling.

The motion also alleges "evidence that items of physical evidence were tampered with in ways unrelated to recovery or preservation efforts."

Suarez's body was recovered after four hours. The lift, embedded upside down 18 feet under the surface, was brought up 10 days later.

The Occupational Safety and Health Administration cited Derr & Isball for one serious violation of OSHA's General Duty clause. The $7,000 fine was reduced to $5,000.

'They Didn't Want to Take the Time'

The motion quotes a representative of one of the general contractors as saying that it was "unsafe" to drive the lift on the barge while the barge was in the water. Furthermore, the barge lacked barriacades or railings, had a relatively small surface area, and was not connected to other barges.

Steve Jordan testified that "one reason" for driving the lift on the floating barge was because workers "didn't want to take the time to" move the barge. The project was four months behind schedule "and therefore at risk of disrupting the start of the Baylor football season in their new stadium," the motion said.

In addition, the construction contract included penalities of up to $20,000 per day for falling behind schedule, the motion said.

The motion also said that Watson had not read the manuals for the lift or the barge and had not been insutructed on flotation devices; nor was the man lift chained to the barge as required.

Finally, the motion said, a "100% tie off rule" was enforced on the job, even though that rule conflicted with others and ended up trapping Suarez on the bottom of the river.