Tower Lets There Be Light Down Below

A global architecture firm has unveiled a design concept to help solve a dark problem in London.

With the influx of high-rise development in the city (more than 200 projects planned), the streets and sidewalks below are increasingly becoming shaded from the sun.

A pair of “No Shadow Towers,” designed by NBBJ, is billed as a solution to the long shadows cast by new skyscrapers. 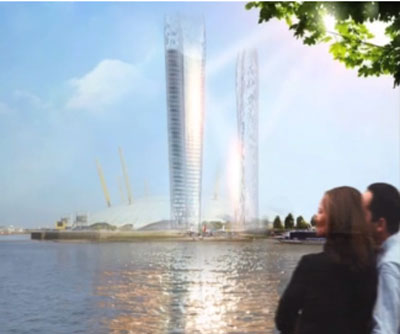 NBBJ / Vimeo
The tower's facade features varying angles of facade panels that distribute light over certain areas at multiple times during the day, according to NBBJ.

The two skyscrapers would work together to redirect and diffuse sunlight to visibly reduce shadows at the towers’ base by 60 percent, compared to similar-sized buildings, according to reports, citing the firm.

NBBJ is an architecture, planning and design firm with a focus on innovation. It has become the go-to architect for the world’s biggest technology companies—Google, Samsung and Amazon, according to Wired.com.

How Does it Work?

The design of the No Shadow Towers is based on a custom computer algorithm.

The system takes into account a variety of factors, such as the angle of the sun, the best views and the site’s location, NBBJ designers have told media outlets.

“The algorithm design is based on the law of reflection,” David Kosdruy, a co-designer of the project, explained to Gizmag.

“Sun reflected from a straight facade provides an even distribution of light at just one point in time over a specific area. From a spherical facade, it results in a concentration of light in one point.

“Our facade, on the other hand, has varying angles of facade panels that distribute light over a certain area at multiple times during the day.”

While the concept is theoretically designed for a site on the Greenwich Peninsula in southeast London, the designers say the project could work elsewhere.

“This idea can be used everywhere and the tower’s forms would change to suit…always unique,” Christian Coop, NBBJ’s design director, told Gizmag.

Coop told The Independent that the project is about “improving the quality of our urban environment…finding a way in which we can have the tall buildings we need without losing natural light on the areas below.”

Moreover, the new design would decrease the likelihood of another melted car, according to reports.

In 2013, light reflecting off an unfinished skyscraper’s curved glass facade reportedly melted parts of a Jaguar parked nearby.

Shop owners also said the reflection off the Rafael Viñoly Architects’-designed building melted some of their merchandise.

Known locally as the “Walkie Talkie” building, the incident sparked a new nickname for the 34-story structure—“Walkie Scorchie.”

Rafael Viñoly Architects was also the designer behind the Vdara Hotel & Spa in Las Vegas, NV.

In 2010, reflections off that 57-story hotel caused a similar solar phenomenon.