Frigid temperatures are being blamed for snapping a cable on one of the U.S.'s oldest bridges, shutting it down for emergency repairs for the second time in two years.

The 166-year-old Wheeling Suspension Bridge—the oldest of its kind still in use in the U.S.—has been closed since Friday (Feb. 20) morning, when a cable broke and fell onto utility lines, according to the West Virginia Department of Transportation.

The agency announced via social media that the bridge would be closed through Friday (Feb. 27) and possibly longer, depending on "inclement weather or unforseen circumstances." 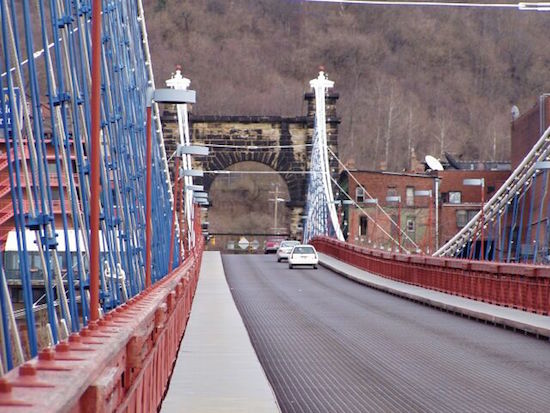 CC BY-SA 3.0 / Chris Light
A 400-foot sway cable on the Wheeling Suspension Bridge snapped Friday (Feb. 20), most likely because of the freezing temperatures, officials said. The bridge was also closed for two weeks in March 2013 when a corroded cable used to keep the bridge deck from swaying broke.

The Wheeling Suspension Bridge spans the main channel of the Ohio River at Wheeling, WV. The main span is 1,010 feet from tower to tower. The east tower rests on the Wheeling shore, and the west tower on Wheeling Island. Construction began in 1847 and was completed in 1849.

Officials weren't sure whether the 400-foot sway cable snapped or was dislodged, Patrick Gurrera, a bridge engineer for WVDOT's Division of Highways, told the Associated Press.

"I am thinking it was probably the cold," Gurrera told WTOV9.com. "The colder things get, things shrink up. Those are tension cables—sway cables—to help the bridge from swaying left and right. And tension could have caused it."

If the cable is still intact, it will be much easier to fix, Gurrera said.

The cable fell onto a cable company's fiber optic line near a jogging trail, according to media reports. Initially, safety officials thought the cable landed on electric power lines.

The bridge was immediately closed to vehicular and pedestrian traffic over concerns that "the bridge could be energized as well as the jogging trail below," said Tony Campbell, Wheeling Fire Department Assistant Chief, according to The Intelligencer/Wheeling News-Register.

Nearly two years ago, in March 2013, the bridge was closed for two weeks after a different snapped cable was discovered during a routine inspection.

Corrosion caused that cable to break, according to a DOH bridge engineer. The cable is not load bearing but keeps the bridge deck from swaying.

The cable that broke in 2013 was on the northeast, river-facing side of the bridge's tower. It anchors to the other side of the tower and passes under two larger cables.

The bridge has a total of 12 iron cables—10 large and two small—suspended from its towers. In 1983, the cables were examined and determined to be in good condition; however, the cables were then rewrapped with a modern, elastomeric plastic, according to a history by the Ohio County Public Library.

Rehabilitation of the bridge, including cleaning, painting, and minor structural repairs, has been planned for several years, but a start date has not been set. The work, estimated at over $8 million, could close the bridge for two years.

The bridge is listed as both a National Historic Landmark and Historic Civil Engineering Landmark.

Built before most automobiles, the bridge was designed to carry horse-and-buggy traffic. It currently has a per-vehicle weight limit of 4,000 pounds. Traffic lights at either end limit the number of cars on the bridge at one time, and drivers are advised to keep at least 50 feet between vehicles.

The bridge deck was rebuilt after being destroyed by a strong windstorm in 1854. In 1956, the deck was completely rebuilt and the road was widened from 16.25 feet to 20 feet.

The road and sidewalk were reconstructed with an open steel grating. In the 1980s, the West Virginia Division of Highways restored the bridge.