London's upcoming garden-turned-bridge will sport a specially developed copper-nickel alloy coating that will reportedly keep the structure maintenance-free for 120 years.

Usually reserved for ship propellers and medical equipment, the copper-nickel alloy (also called cupro-nickel) will cover the belly of the 366-meter (1,200-foot) Garden Bridge over the River Thames.

The £175 million (about $274.6 million USD) bridge will be the most expensive footbridge in the world, largely because of the copper cladding, civil engineers told BBC.com. 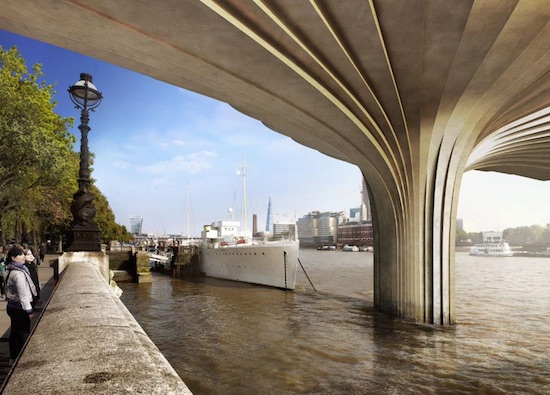 Twitter.com / @TheGardenBridge
Mining company Glencore donated the funds for the copper-alloy nickel, said to be the most expensive aspect of the planned £175 million (about $274.6 million USD) Garden Bridge over River Thames.

The project is being managed by a UK nonprofit registered as the Garden Bridge Trust and will largely be funded by donations from individuals, charitable foundations and companies. Additionally, the Treasury and Transport for London have each pledged £30 million (about $47 million USD) of public funds.

The company called the material a "super-strength protective coating, able to withstand the effects of its river environment."

The concrete piers will be coated in a thin layer of the material and roll-bonded to the structural steel.

The coating, developed specifically for its low maintenance and attractive finish, will run from the riverbed to the base of the balustrades on the bridge deck.

It will take 240 tons of the material to coat the underside of the structure, forming a "corrosion protective skin to the carbon steel structure." The rust-resistant system is expected to last for 120 years without maintenance, the company said.

"We are delighted to be part of making this innovative and iconic project a reality," said Tony Hayward, chairman of Glencore.

"Our support will enable the Trust to introduce a unique material that will stand the test of time and help build on the rich cultural heritage of London's architecture and design."

The bridge will be planted with shrubs, flowers, 270 trees, woodland and meandering walkways in a "ground-breaking design" that "will integrate a new kind of public space into the fabric of the city, adding to London’s rich and diverse horticultural heritage," according to the Trust.

The project was sparked by a request by Transport for London to improve pedestrian links across the River Thames. TfL governs the transport system for Greater London, a 607-square-mile area with more than 8.1 million residents.

The bridge was approved by the Westminster City Council and the Lambeth Council before receiving the blessing of Deputy Mayor for Planning Sir Edward Lister in December.

"We have worked hard with both local authorities and the Garden Bridge Trust to ensure that the bridge is of the very highest standard of design while remaining fully accessible to those who work, live in and visit the city," Lister said.

The Garden Bridge Trust has shortlisted civil engineering contractors BAM Nuttall, A Bouygues TP/Cimolai Venture and Dragados. The three companies are competing to complete the bridge's design and construction, and one will be appointed in late spring.

The selected contractor will work with a range of specialists, including:

Construction is slated to start in the fall, and the bridge should be open to the public in summer 2018.

London Mayor Boris Johnson said the bridge would "provide a fantastic new landmark for London whilst supporting regeneration and economic growth on both sides of the Thames."

"It will create a stunning oasis of tranquility in the heart of our city and boost our plans to encourage walking in the city," said Johnson.

Mervyn Davis, chairman of the Garden Bridge Trust, expressed his pleasure with the coatings.

"The copper-nickel skin is an integral part of the design and upkeep of the bridge and, just as important, is the stunning appearance that the warm color of the material will create," said Davies.

Not everyone is as excited.

Some Londoners aren't pleased with the plans for the structure, noting that it will obstruct some views of St. Paul's Cathedral and other beloved landmarks.

Critics have vowed an appeal to Communities Secretary Eric Pickles to "call in the application for a full public inquiry" or to initiate a judicial review of the City Council actions.

According to Michael Ball, a local resident and former director of Waterloo Community Development Group, the borough of Lambeth unlawfully granted planning permission.

Ball's lawyers said Lambeth failed to comply with its duty to protect the historic settings of listed buildings nearby, theguardian.com reported.

The lawyers also contend that not enough consideration has been given to funding for long-term maintenance.

"This seems like a poorly thought-through project which, although attractive at first glance, on reflection is seriously deficient in a number of important respects," said attorney Richard Stein of the firm Leigh Day.

"We are asking the court to quash the planning permission and to send the project back to Lambeth for much more careful consideration before such a significant change is made to the historic heart of London," Stein said.

The Trust said it would be responsible for raising the £3.5 million (about $5.5 million USD) annually projected for  future maintenance and operation.

The Trust has also said it would work with local communities and stakeholders to address concerns and with planning authorities to ensure that all conditions are met.