Coating manufacturers worldwide will help subsidize the cleanup of China's notoriously foul air through a new tax on Volatile Organic Content in paints and coatings.

Implementation details are still being worked out, but the new regulations took effect Feb. 1 and "directly affect coatings companies," the American Coatings Association told its members this week.

The ACA's International Affairs Committee has been watching the developments in China for months. 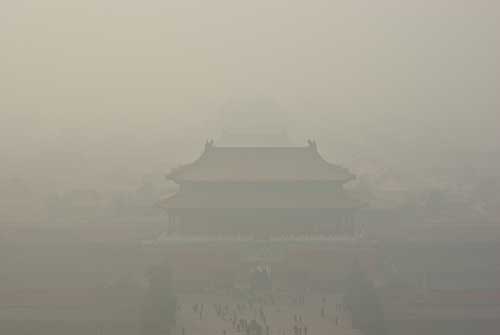 ©
Dangerous levels of air pollution have accompanied China's rapid industrialization and urbanization. The toll is seen across Beijing, including the Forbidden City.

In May, the coating manufacturers' association warned members that the Chinese government had been developing regulations "rapidly over the last two to three years, due to public pressure against the rapidly deteriorating air quality."

The top initiative then under consideration was the VOC limit and tax on solvent-containing products, ACA reported.

The new regulation, known formally as “Finance Tax (2015) Notification on Imposing Consumption Tax on Battery and Coating Products,” was developed jointly by the Ministry of Environment Protection, the Ministry of Finance, and the National Development and Reform Commission.

Published at the end of January, the regulations impose on coatings manufacturers a four percent tax on the invoice price of any coating whose ready-to-spray VOC level exceeds 420 g/L, according to ACA.

In addition, new vehicle OEM facilities are already required to use only waterborne or low-VOC coatings.

Although the regulations had been under discussion for months, "the immediate implementation ... leaves coating suppliers and their customers little time to adapt formulations or administrative processes to the now-official requirements," ACA said.

The tax will be collected by local tax authorities, and VOC levels will be verified by provincial level Quality Inspection Authorities, but many other implementation details are not yet known, ACA said.

In a statement reported by ACA, she added: “Our industry welcomes the opportunity to continue to contribute its expertise in order to make the new regulation as effective as possible.

"Industry across China must share in the responsibility to support the long-term sustainability of China’s development.”

A new English-language version of the longtime journal of the Chinese coatings association offers context for the new regulations and insights into what may lie ahead for coating makers.

The third and latest issue of China Coatings delves into the VOC emissions issue in depth and references a new environmental program by coating makers called "Beautiful China, We are in Action."

The issue features an article by the Ministry of Environmental Protection detailing the staggering air pollution that has accompanied China's rapid industrialization, urbanization and huge spike in energy consumption.

As a "key precursor" to fine particulate matters, low-level ozone and other secondary pollutants, VOC content is a key piece of the pollution puzzle, the ministry says.

"Toxic VOC" levels account for about 30 percent of all pollutant emissions in China, with about 25 million tons emitted annually and growing, the government says.

"[T]he impact of VOC pollution on physical health and life safety of the public is indispensable."

China Coatings also includes an article on interpreting the country's environmental labeling standard for waterborne coatings (primarily, architectural coatings) and a discussion of waste gas emission and treatment during coatings manufacturing and painting.

To subscribe, email chinacoatingnet@vip.163.com. The journal's URL is www.chinacoatingnet.com, but repeated efforts to access the site Thursday (Feb. 19) were unsuccessful.

ACA says it will continue to monitor the Chinese developments for its members. Meanwhile, for more information, contact ACA's John Hopewell.