Student Mural Fires Up a Flip-Flop

A Canadian high school is under fire for its now-you-see-it-now-you-don't response to a student mural showing two young men embraced in a kiss.

The painting—approved in advance by the school’s principal and art teacher—went up in the halls of the Onoway Junior-Senior High School building at the end of January, reports say. 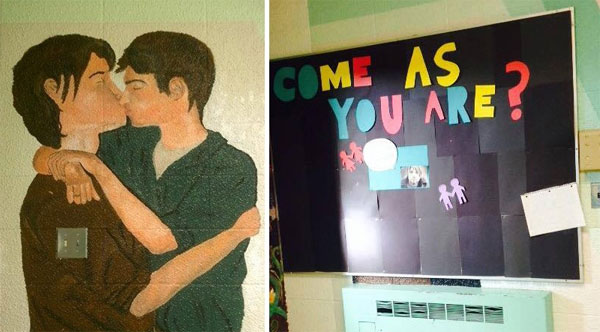 Supplied / CTV Edmonton
Though initially approved by school officials, the student mural at left was recently covered with a bulletin board (right), inciting a flurry of opinions. The school's principal says that covering the piece was a "misstep."

However, following complaints, school officials reportedly covered the artwork with a large bulletin board.

Subsequently, the artwork was uncovered. But the mural’s fate has yet to be determined, according to a Feb. 2 letter to parents from the school’s principal.

The school, in Onoway, Alberta, has a longstanding tradition of allowing art students to express themselves by painting on the walls of the school, according to reports.

This particular mural was the work of 11th grader Kaela Wilton, 16. She said she had designed the work to show support for gay people, including those who are afraid to come out.

“I wanted to do something controversial,” Wilton told CTV News. “I wanted to hit on a topic, and gay rights is something I’ve always felt strongly about.”

After her work was covered up, Wilton said she felt betrayed, since she had initially received approval for the project.

The school’s principal, James Trodden, told the news outlet that the piece was covered primarily because it depicts affection.

“We had looked at that and said, ‘You know, kissing isn’t allowed in school,’” Trodden said.

Though it is uncovered now, Trodden said the mural may not remain.

More discussion with students, parents and the community is needed, he said.

In his letter to parents, Trodden said, “[I]n retrospect, covering the mural was a misstep.”

He also admitted that the school had not completely envisioned the larger implications of public displays of affection, sexual orientation and gender identity when it initially approved the mural.

The school’s actions have ignited a heated public debate.

Some have supported the school’s approval and criticized its decision to cover the mural. Others have questioned whether the mural would have been received differently if the subjects were another gender or sexual orientation.

“Such a shame,” Terry Buehl commented on a CBC report. “A student mural depicting love and acceptance is very much appropriate for a school wall.

"The Principal and Art teacher made the right call initially. Instead of immediately caving in to misguided parental complaints, they could have used this as opportunity to initiate a dialogue on evolving morals.”

Lisa Palmer commented, “If it showed a girl and boy hugging and kissing, there would be no story.”

Many others, however, take issue with the mural's sexual nature, saying that it doesn’t belong in the school environment.

“A mural depicting any two people making out has no place on a school wall,” Jimmy O’Neill commented in a Huffington Post article.

The controversy has led the school to put these questions to the public:

The young artist told CTV that she is working to come up with a meaningful way to cover the piece in the event it is permanently censored.