In one of the biggest corruption crackdowns in New York City history, authorities have announced the indictment of 50 city building inspectors, contractors, clerks and other defendants in a massive pay-for-play scheme.

On Tuesday (Feb. 10), Manhattan District Attorney Cyrus R. Vance Jr. painted a complex picture of widespread and varied schemes in which high-ranking building officials turned a blind eye to rodent infestations, fire traps and hundreds of other building violations in exchange for thousands of dollars in cash, vacations and, in one case, a house and two SUVs.

To date, the fraud has involved more than 100 properties and about $450,000 in bribes, Manhattan D.A. Cyrus R. Vance Jr. said at a press conference. The investigation continues, he added. 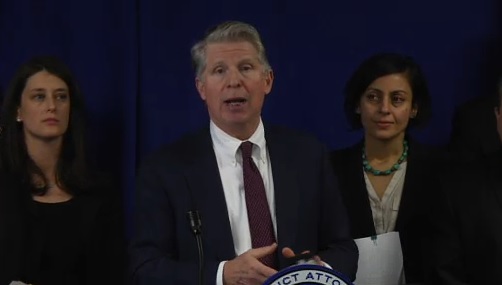 The rest are private-sector property managers, contractors and expeditors (filing representatives registered by the DOB to act as middlemen between the Department and contractors, homeowners, and managing agents).

All are facing a variety of felony charges that include bribery, bribe receiving, falsifying business records, tampering with public records and official misconduct. All of the charges carry the potential for prison terms.

The defendants include the chiefs of construction development in Manhattan and Brooklyn, individuals at the "highest level of management" in the city offices, Vance said.

The stunning sweep caps "the first phase" of an investigation that began two years ago into a single report of a bribery of a single DOB inspector.

“Today’s cases demonstrate that the same surging demand that drives the pace of development can inspire the taking of shortcuts, and the taking of bribes."

According to court documents and statements made on the record in court, 11 DOB employees, ranging from clerks to chiefs, allegedly accepted bribes in Manhattan and Brooklyn in excess of $400,000. In exchange, the employees allegedly cleared complaints, Stop Work Orders, and violations, and expedited DOB inspections.

Defendant David Weiszer, for example, is charged with bribing multiple DOB employees up to the Chiefs of Construction Development in Manhattan and Brooklyn.

“On a near-daily basis, Weiszer would send a list of addresses of properties owned by his clients to one of the chiefs of development, enabling his clients to jump the line for inspections, bypassing numerous proper channels along the way," Vance said.

“And without fail, the chiefs would send a particular inspector to go sign off on inspections of those properties, and all within the same day.”

The inspector, Artan Mujko, eventually ended up $100,000 richer, and the Chief received $200,000 for mortgage payments, two SUVs, a cruise and "other valuable, but all illegal, gifts," Vance said.

Weiszer also paid off clerks (now also charged) who allowed him to cut past people in line, even though he lacked the required credentials.

Weiszer was the only defendant who was not arrested Tuesday. He remained at large.

In another case, Vance said, DOB Chief of Development for Manhattan Construction Donald O'Connor took bribes from developers and owners of high-profile Manhattan bars. In exchange, O'Connor would "wavie their fees, dismiss their complaints, alert them to undercover site inspections" and claim to inspect buildings he never visited, Vance said.

O’Connor also is accused of helping a contractor hide from city oversight after a worker fell from an elevated steel beam on a job site. O’Connor advised the contractor not to call an ambulance, even though the worker could not move, because that could invite questions about safety on the site, The New York Times reported.

A Brooklyn HPD inspector is accused of taking more than $20,000 from a property manager to remove 476 violations at 13 properties. The violations ranged from roaches and missing smoke detectors to bad lighting and a failing ceiling. The same inspector is implicated in dismissing hundreds of similar violations at dozens of other properties.

That inspector and another are even accused of kicking tenants out of their building without a valid order and under false pretenses, Vance said.

Then there was the DOB Supervisory Inspector who allegedly schemed with a developer to expunge complaints against the developer and alert him to impending audits in exchange for a Puerto Rican vacation.

The fraud was driven by the need to clear violations that were standing in the way of lucrative sales in New York City's red-hot real-estate market, he said.

“Today’s cases, unfortunately, are harbingers of other potential casualties of the current housing boom—tenant safety and government integrity,” said Vance.

He added: "The whole matter remains under investigation by the Manhattan DA Rackets Bureau."