If you build schools, hotels, hospitals or offices, 2015 and 2016 are your years, according to a new U.S. construction forecast that heralds a long-awaited comeback in the institutional and commercial sectors.

Double-digit increases in commercial construction spending are expected for 2015, led by "vigorous levels of demand for hotels and office buildings." 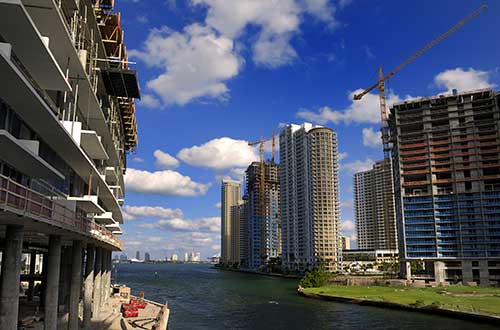 Hotel construction spending is predicted to rise by 15.3 percent this year and 10.4 percent in 2016, while office construction is looking at growth rates of 12.9 and 11.5 percent, respectively.

You Say You Want an Institution...

Overall, construction spending is expected to increase by 7.7 percent this year and 8.2 percent in 2016, the forecasters say.

“This is the first time since the Great Recession that every major building category is projected to see increases in spending,” said AIA Chief Economist Kermit Baker, PhD.

“But by far, the most significant driver that will fuel greater expansion in the marketplace is the revival in the institutional sector—especially with growing demand for new healthcare and education facilities, which alone traditionally account for a third of spending on new building construction.”

He attributes the improvement to pent-up demand and greater security, especially by local governments, to pursue projects.

The growth comes on the heels of a year, 2014, that registered its best GDP, highest housing starts, and lowest unemployment rate in three years, Baker said. 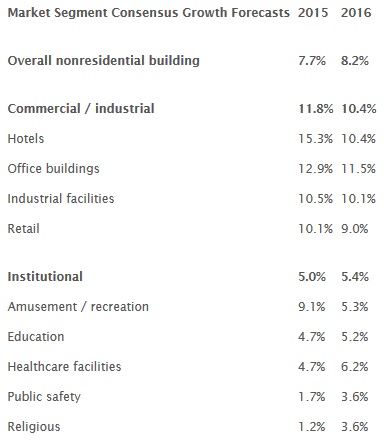 "On all the major indicators of the health of our economy, we're moving in the right direction," despite a stock market that remains "incredibly volatile," Baker said.

Consumer confidence is back to its pre-recession levels, he added.

The View by Region

On the other hand, the recovery is not progressing evenly nationwide, which Baker called "somewhat concerning."

The South, particularly South-Central states, are doing "extremely well," while the West is "building up steam" and the Midwest has "hung in pretty well."

The Northeast has been relatively weak in recent months, however, for reasons Baker said he could not explain. Still, he anticipated improvement there.

“The overall construction industry appears to be on very solid ground for the next two years," Baker said.

"That said, uncertainties in international economies, potential labor shortages, lower energy costs, rising interest rates and construction costs all are factors that we will be watching closely to see how they may adversely impact the marketplace.”