Traces of red paint 2,000 years old have been discovered during an ongoing $33 million restoration of the Colosseum in Rome.

The red paint—made up of clay minerals and iron oxide—was used over Latin letters and numbers etched into the ancient structure, news reports relate. 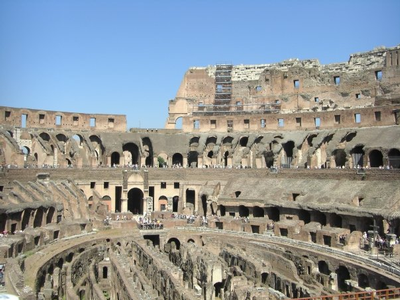 Jill Speegle
In the Colosseum, painted numbers guided visitors to their seats in accordance with their social class.

The finding shines light on the management of the tens of thousands of spectators who flocked to see gladiators, wild beasts and public executions.

Then, as now, the numbers at entrances and on seats were designed for crowd control.

“It was believed the paint would not have survived at all,” she said.

The numbers were repainted every two or three years, making the finding all the more remarkable, restorers said.

Construction on the Colosseum was started by the Emperor Vespasian in A.D. 72 and finished by his son Titus in A.D. 80.

The arena, made of blocks of travertine, bricks, and blocks of tufa, held 50,000 visitors. The building had 80 archways and 76 numbered entrances, according to monument literature.

Restorers say the seating system worked like this: Visitors were given tickets that indicated the numbered arch they were supposed to enter. Once inside, there were other numbers to guide the crowd to their seats in accordance with their social class.

While entrance to the Colosseum was free, the amphitheater was divided into four tiers, the New Historian reports.

p>The emperor’s box was at the top, along with seating for Rome's political and social elite. The second tier was reserved for the Roman upper class—government officials and businessmen.

Roman citizens occupied the third tier; and women and the poor sat or stood on wooden benches in the fourth tier.

p>The paint discovery also attests to the delicacy of the restoration’s water-powered cleaning method, which removes centuries of dirt and smog while preserving the ancient surfaces underneath, reports said, citing the lead restorer Cinzia Conti.

The colossal restoration aims to repair damage done to the monument since the Middle Ages.

The work began in 2013 and is being funded by the Italian shoe company Tod’s.