Industry Engages the Next Generation

LAS VEGAS—SSPC has found its Fountain of Youth in a crop of fresh faces who are advancing research and brainstorming ways to make a difference in the coatings industry.

One of the goals of SSPC—and the coatings industry as a whole—is to bring in more young talent.

SSPC 2015, which closed Friday (Feb. 6) in Las Vegas, introduced new ways to do that. New at this year's conference were Poster Sessions, which invited college and graduate students to show their current or previous research. 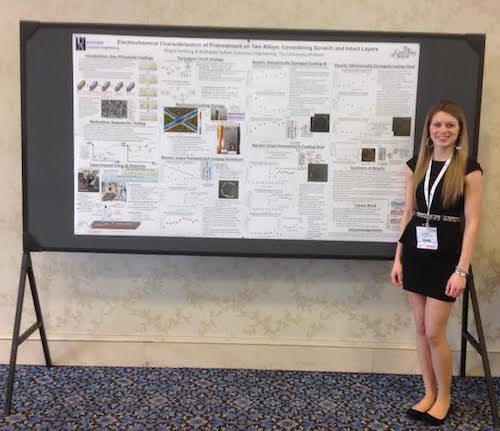 Abigail Helbling and Nathaniel Sutton, from the Corrosion Engineering department at the University of Akron, looked at an aspect of zinc phosphate coatings in their poster, "Electrochemical Characterization of Pretreatment on Two Alloys, Considering Scratch and Intact Layers."

A zinc phosphate pretreatment was tested on scratched and intact samples of aluminum and steel substrates, and the research observed the first stage of coating breakdown.

The authors were motivated to test aluminum because it is starting to replace steel in some applications. However, with little to no adhesion on the aluminum samples, the coating provided virtually no protection.

The steel was a different story, said Helbling. After one day, the pretreatment was "relatively perfect." But within a few days, she said, the water started to uptake on thinner areas of the coating.

"With the steel, the coating didn't go to complete failure because of time limitations," Helbling said. "If I could test more, I'd definitely test that until failure to see how long the coating could actually go until it was completely useless."

Another group's work aimed to understand how sodium chloride affects water uptake into a film and how it interacts with corrosion-inhibiting pigments—important considerations in developing the next generation of anticorrosive coatings.

The poster, "Understanding the Effects of NaCl Concentration on Zinc Phosphate Pigment Morphology and Composition by Advection Through Phenoxy Thermoplastic Free Films," was based on research by Robert C. Bennett, Greg Curtzwiler, Christina Konecki, Dilhan Fernando and James W. Rawlins. All are students at the University of Southern Mississippi's School of Polymers and High Performance Materials

Coating free films were immersed in aqueous sodium chloride solutions, and the team studied how ions diffused out of the system and into the liquid.

"By looking at how this diffuses out, we can study how that solvent affects the pigment that we are using, which is zinc phosphate in this case," explained Bennett, who represented the research at the conference.

"We can then look at how the corrosion inhibition is going to be affected due to this diffusion," Bennett said.

In this study, the internal stress of an epoxy-amine primer applied to bare steel was studied through a number of wet and dry cycles.

To better understand the effect of internal coatings stress and adhesion, the authors wanted to change the adhesion to the substrate while holding the coating constant. Select strips of stainless steel were given one of two pretreatments: one with an epoxy functionality that aids in chemically bonding the coating to the substrate and one with a vinyl group that would act as a barrier to adhesion.

Clark said he would also like to research how the internal stress of the primer changes as a function of aging and environmental conditions.

The casual two-hour event provided an opportunity to network, socialize and discuss how students and young professionals can make a difference in the coatings industry. Career paths and how to achieve a leadership position were topics of conversation.

Leonard discussed her own path from college into the coatings engineering and construction world. Protective coatings is not an industry many people enter intentionally, said Leonard, so the early years can be overwhelming.

Leonard spoke of how finding mentors, gaining field experience, and obtaining SSPC certifications shaped her career. She also answered questions about how others can advance in their careers.

Six students received $2,500 scholarships during the awards luncheon Tuesday (Feb. 3). A panel of three SSPC Board of Governors members selected the recipients. The winners are:

JPCL, the voice of SSPC, is also seeking to recognize the industry's young talent.

The journal is inviting nominations for notable young professionals to showcase in a special issue in August. Coatings Professionals: The Next Generation will showcase these up-and-comers.

Nominees must be 35 years old or younger. Nominations may be submitted here. Questions may be directed to Pam Simmons, JPCL's editor-in-chief.