The utility has been embroiled in numerous lawsuits, enforcement actions, and dozens of fines since its San Bruno pipeline exploded in September 2010, killing eight people and destroying 38 homes.

The new fine is separate from a $1.4 billion penalty the commission proposed in September against PG&E for thousands of state and federal pipeline violations. Commission staff had recommended a $2.25 billion fine after its investigation of the San Bruno disaster, calling the utility's conduct "morally and ethically reprehensible."

The civil case followed a criminal indictment issued last July against the utility, alleging that PG&E "knowingly and willfully" violated pipeline safety laws and obstructed the federal investigation into the San Bruno case. That charge carries a $1.1 billion fine.

The larger, $430,000, was imposed for three violations of specific federal requirements to manage system integrity, including periodically inspecting and testing pipelines to identify and repair potentially hazardous defects. 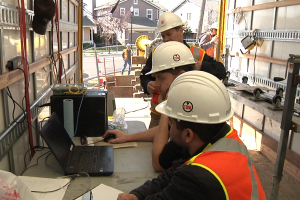 James Green / PGECurrents.com
PG&E has been fined $530,000 by California regulators for natural gas-related issues discovered during a safety audit. The utility says it's taking action by "making significant process improvements."

According to the CPUC, PG&E failed to "immediately excavate and examine pipelines that showed signs of potential corrosion." These violations were first found during an audit that started in September 2012 and confirmed through additional investigations by CPUC staff through 2014.

Standards state that immediate indications of corrosion require excavation. However, in some instances, PG&E ignored findings of possible corrosion, instead citing its own findings on previous digs, the audit found.

"The safety of our customers, employees and the communities we serve is always our top priority," Donald Cutler, PG&E spokesperson, said in an emailed statement Monday (Jan. 26).

Cutler said the company was "working to resolve the issues to the satisfaction of the CPUC."

"We're evaluating the citations, and it's important for our customers to know that since these audits took place, we've taken action by making significant process improvements," Cutler said.

PG&E has a long-term integrity management plan (LTIMP) to identify acceptable preventive and mitigative measures for pipeline segments. However, many of the LTIMP reports reviewed in the audit were not generated in a timely manner, the commission said.

As of September 2012, the utility had completed only 17 percent of LTIMPs based on its 2004 baseline assessment mileage, the CPUC said.

At the same time, about 610 LTIMP projects were still pending, one-third of which were categorized as Priority 1 projects.

However, many of the inspections for the management plans were incomplete. Meanwhile, PG&E relied on equipment that could detect pipeline corrosion, but not other issues, the audit found.

Additionally, many of the projects relied on old information. For 116 of the priority projects, PG&E used inspection information conducted before 2006.

"It appears that since PG&E generated LTIMPs several years after the completion of integrity assessments, by the time PG&E started implementing the [preventive and mitigative] measures, in some cases, covered segments were due for a reassessment," the commission stated.

The CPUC said PG&E needed to clear its project backlog and establish procedures to implement pipeline safety programs in a timely manner.

A $100,000 penalty was issued for two violations related to a gap in the company's operator qualification procedures that potentially allowed non-qualified personnel to perform field work, "which would create a hazardous condition for the public and utility employees." Those violations were discovered in an audit that started in November 2013.

The commission said that PG&E's operator qualification plan did not include a way to communicate with contractors when there were changes to procedures, tool, standards and other elements.

PG&E has already undertaken corrective actions on that issue, the CPUC said.

PG&E has until Feb. 2 to respond to the citations.

The Safety and Enforcement Division has staff-level authority to issue citations to natural-gas companies for violating CPUC or federal gas safety codes and regulations. The financial penalty can range up to $50,000 per day of violation.

Safety violations are identified through ongoing audits, inspections and investigations, or by the utilities themselves through mandatory disclosure requirements.

California's own oversight of pipeline issues has also drawn fire from the public and federal regulators. The CPUC has frequently been criticized for being too cozy with utility companies.

In December, an audit of the CPUC by the U.S. Department of Transportation's Pipeline and Hazardous Materials Safety Administration blasted the agency for including inaccurate information in documents submitted to federal authorities and for not including proper notation in inspection files.

"A review of incident records found a need for improvement in the overall process and documentation of incidents from the initial report through the investigation, enforcement actions and, finally, the closure of the incident with the operator," the audit said.

U.S. Rep Jackie Speier (D-CA) said the audit showed that "the CPUC has the same problem as PG&E: bad record-keeping."

"Their two-year backlog and inadequate documentation of investigations makes the CPUC among the worst in the nation, and this audit doesn't even their ethical problems," Speier said.

Michael Picker, president of the CPUC, has said that PG&E's weak oversight record "keeps me awake at night."

Picker replaced Michael Peevey, who held the position for 12 years but announced he wouldn't seek reappointment after coming under fire for alleged inappropriate communications with PG&E.

Emails obtained last year by San Bruno as part of a lawsuit settlement with the CPUC showed a high-ranking aide to Peevey had advised a PG&E executive on how to stave off a legal challenge related to the deadly San Bruno blast.