Nearly 17 years ago, a room full of engineers, architects and seismologists—many with little or no bridge building experience—voted to use a novel self-anchored suspension span to replace the quake-damaged eastern span of the San Francisco-Oakland Bay Bridge.

The green light for a "design that bordered on experimental," instead of a more traditional, cable-stayed bridge was a surprise—shocking, even—to the bridge builders and designers serving on a panel tasked with picking the replacement design, a new investigation by the San Francisco Chronicle reveals.

And although the $6.4 billion bridge opened on schedule Sept. 2, 2013, its construction and oversight continue to fuel dozens of reports criticizing the California Department of Transportation's handling of the megaproject—a project whose problems can be traced to its design, the agency says.

The single-tower, SAS bridge features a unique design in which the 137-strand main cable loops over the tower and under the bridge, where the strands are inserted into sockets that are attached to thread rods. The rods pass through the walls of two chambers on the bridge's east end, where they are locked in place. 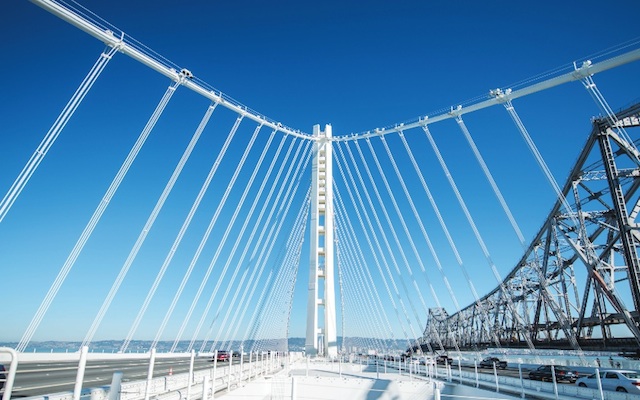 The SAS bridge is the largest of its kind in the world and has many unique features, including the first use of a shear link fuse in the 525-foot-tall steel tower of the cable supported bridge. It is also the first suspension bridge constructed without connection between the deck and tower.

According to the Chronicle, there were a handful of short, self-anchored spans built in the U.S. and Europe, but the technology "was considered all but obsolete by 1997."

Divided from Day One

It all started when the state decided that retrofitting the original eastern span, damaged in the 1989 Loma Prieta earthquake, wasn't worth the cost. So the Metropolitan Transportation Commission tasked 34 people with picking a new bridge.

"I don't think any of us foresaw all the issues," Joe Nicoletti, the panel chairman and a structural engineer specializing in seismic analysis, told the newspaper.

The group included only a handful of bridge experts; it was mainly made up of seismic experts, building engineers and architects.

Steve Heminger, the executive director of MTC and a staff member on the project, described the very first panel meeting in 1997 like being at a wedding where the two families didn't get along.

"There was no prearranged seating, but all the architects were on one side and all the engineers were on the other," Heminger told the newspaper.

The group was presented with two options: a more conventional cable-stayed bridge, or the novel SAS span that, on a scale this large, would be like no other bridge in the world. The group was told that both would cost about $1.5 billion, with maybe an extra $173 million for the SAS option.

"At the time, it seemed a meaningless difference" and "well worth spending," Jeffrey Heller, a high-rise architect serving on the panel, told the Chronicle.

On May 29, 1998, the panel met to make the official decision on the design. Only 15 of the 34 members showed up. (See the Chronicle's breakdown of panel members and how they voted.)

The SAS won in a 12-7 vote. All but one of the bridge experts opposed the final design. Those that backed it still stand behind their decision, saying the problems "were never insurmountable" and the problems all stem from Caltrans mismanagement.

Caltrans has certainly taken the brunt of criticism for the project, including a series of informational hearings run by the state's Senate Transportation and Housing Committee that looked at reforming the agency before allowing it to tackle another megaproject.

However, Peter Taylor, a bridge builder and designer from Canada on the panel, said Caltrans officials had been "absolutely horrified" by the choice at the time.

"I was watching their faces when the votes were counted," Taylor recalled to the newspaper. "The vote clearly did not go the way they anticipated."

Heminger and other MTC staff were also surprised when the SAS design was chosen.

"The cable-stayed was the overwhelming favorite [...] all the way through the process," said Heminger.

Among those who voted for the design is Ephraim Gordon Hirsch, a structural engineer with no bridge experience, according to the Chronicle.

"All the troubles that this design has encountered are attributable to Engineering 1A screwups, not to the fact that it is a self-anchored suspension bridge," Hirsch said.

"My bottom line is, I think the design is excellent. We made the right choice."

However, a team of engineers tasked with providing an independent review of the design concluded otherwise.

"Some of the problems that developed are a result of the complex design that was chosen for the bridge," the panel said in its report, "Technical Review of Design and Construction of New East Span of San Francisco-Oakland Bay Bridge," which was submitted to the California Senate Transportation and Housing Committee in August 2014.

"In discussions with project engineers and review of the documents, the panel understaood that the SAS was not the engineers' first choice and that, in fact, it was opposed by many on technical grounds," the report said.

"As with most projects of this magnitude and complexity, unintended problems are bound to occur with time," the panel wrote.

And those problems have certainly occurred, often overshadowing the marvel of the one-of-a-kind structure.

Last April, an investigation by The Sacremento Bee revealed rust on cable strands and inside one of the chambers designed to keep out water and marine air.

Andrew Gordon, a spokesman for Caltrans, told The Bee in an email that the rust was attributable to "metal shavings/particles generated by grinding and other work."

"The opening of the bridge in September did not mean that all work was completed," Gordon said. "...We are still buttoning up the bridge."

Between December 2011 and December 2012 during construction, the chambers were soaked with water, and cables and anchor rods were exposed to more than 21 inches of rain, in addition to the Bay's marine environment, Caltrans engineer Bill Casey told the newspaper.

The rods, which secure a shear key for seismic stability, already experienced issues last year, when 32 of them popped loose days after being tightened. Caltrans developed a steel saddle retrofit to secure the shear key and started a testing program to find out if other rods need to be replaced.

"The SAS was chosen on the basis of aesthetics and broader community input without a full appreciation of the complexity of the undertaking and the potential for problems and cost overruns," the panel reported.

"In addition, it appears there have been a number of interruptions during design and construction outside the control of the engineering and construction teams that added significantly to the cost of the bridge."

In response, Caltrans' director Malcolm Dougherty said he was "pleased the report concluded that [Caltrans] used appropriate methodologies, approaches, and assumptions during design and construction activities.

"These conclusions help underscore our contention that the new bridge is safe," Dougherty said, echoing the sentiment Caltrans has worked to convey throughout the entire Bay Bridge debacle.