Nearly half of a Pennsylvania utility's pipelines are "at risk," and the 80-year time frame for replacement just isn't fast enough, state regulators are saying.

According to public records, about 49 percent of PGW's pipeline (1,994 miles) is considered "at risk" and is in need of replacement—the highest percentage of risky pipeline versus total miles of main out of any of the state's natural gas utilities by a factor of two, the PUC said. 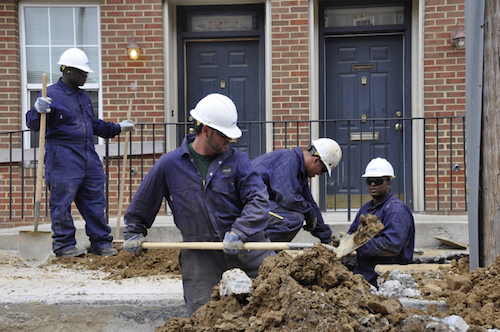 PGWorks.com
According to its website, PGW replaced over 18 miles of cast iron gas pipeline in 2013. The PUC said it cost the company about $1.4 million to replace one mile of pipeline in 2013.

PGW is the nation's largest municipally owned gas utility and manages over 6,000 miles of gas mains and service pipes. About 1,500 miles of the system is cast iron gas pipes, some of which date back to the 1800s, TribLive.com reported.

The 179-year-old utility serves about 479,000 residential and 25,600 commercial and industrial customers within the city of Philadelphia.

The analysis is a follow-up to issues discussed at an en banc hearing in November on PGW's safety and aging infrastructure.

"We discussed many issues with PGW at the en banc hearing, but our biggest concern continues to be the safety of Philadelphia consumers, which is threatened by at-risk pipelines and an alarmingly slow replacement schedule," said Robert F. Powelson, PUC Chairman.

At the current rate of replacement, it will take about 80 years to replace all of the company's at-risk pipe. In 2013, it cost PGW about $1.4 million to replace one mile of pipeline, according to the PUC.

A message left with the company's media hotline was not immediately returned Wednesday (Jan. 14).

According to its website, PGW replaced over 18 miles of cast iron gas pipeline in 2013.

Cast and wrought iron pipelines are among the oldest constructed in the U.S., and the degrading nature of iron alloys has greatly increased the risk involved with their continued use, according to the Pipeline and Hazardous Materials Safety Administration.

"We will take an in-depth look at PGW and determine what may be done to accelerate this process and avoid tragic accidents, while at the same time being mindful of how much of a burden ratepayers can bear," said Powelson.

Powelson has ordered all relevant PUC bureaus to start a comprehensive three-step analysis into the utility that includes:

Once the review is completed, the PUC plans to release a report of its findings.