RPM's World is Flat in Q2

Carboline parent RPM International Inc. squeezed out increases in net income and earnings in the second quarter, despite flat sales, shakiness in Europe, and a disappointing nail-polish acquisition.

Nevertheless, the company reduced its earnings guidance for the year.

Industrial segment sales, which make up nearly two-thirds of the Ohio holding company’s business, inched up 1.4 percent in the second quarter of fiscal year 2015; consumer sales slid by 2.8 percent for the quarter, RPM reported Wednesday (Jan. 7). 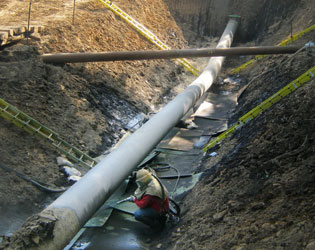 Carboline
RPM's Carboline is the top U.S. supplier of corrosion control coatings. RPM's industrial sales increased by 3.6 percent in the first half of FY2014.

Those showings were similar to the company’s performance for the first half of the year, which saw gains across the board in the 1 percent range.

On the plus side, the forthcoming reconsolidation of a key RPM subsidiary and its associated businesses should substantially bolster the sales and income column next quarter, the company said.

RPM announced in December that it had gained final court approval for a reorganization plan to reunite its Specialty Products Holding Corp. and SPHC's seven subsidiaries with the rest of the parent company.

SPHC, an RPM subsidiary, and its businesses have been living in the legal netherworld of bankruptcy protection since May 2010 as RPM developed a plan to permanently resolve hundreds of millions of dollars in asbestos claims related to its Bondex International subsidiary.

In July 2014, RPM announced that it would create a $797.5 million trust fund to address all asbestos claims going forward. The last step in the process was to reunite SPHC and its subsidiaries with RPM and its balance sheet.

In the third quarter, these companies (and their $400 million in annual sales) will rejoin RPM:

Meanwhile, however, chairman and CEO Frank C. Sullivan reported a "mixed" second quarter, "with stronger sales in our businesses serving the U.S. commercial construction market offset by weaker results in Europe, a continued unfavorable year-over-year trend from our Kirker nail enamels business, and the negative impact of foreign currency."

Overall net sales of $1.07 billion were flat compared to last year. Consolidated EBIT (earnings before interest and taxes) increased 3.2 percent, to $120.1 million, while second-quarter net income was up 9.8 percent. Earnings per diluted share increased 8.3 percent, to $0.52.

Segment sales for the quarter were flat, but the segment's first-half sales improved 3.6 percent, to $1.49 billion. Organic sales increased 2.6 percent, including foreign exchange losses, while acquisition growth added 1.0 percent. EBIT for the first half was flat over the prior-year period.

Sullivan centered much of the problem in the Eurozone: "Most of our European businesses are experiencing a challenging economic climate, negatively impacting our results," he said. "Additionally, the strong dollar has negatively impacted all of our international results upon translation."

On the other hand, the U.S. commercial construction rebound boosted RPM's concrete admixture and commercial sealants companies, he said. Remediation equipment for water and smoke damage also performed well, as did the South American businesses.

The smaller consumer segment comprises 18 brands, including the well-known Rust-Oleum, DAP, Varathane and Zinsser—brands that, as RPM says, "can be found on almost every garage or basement shelf in the U.S. and Canada."

The quarter also recorded a $2.8 million pre-tax one-time cost for legal expenses related to a U.S. Securities and Exchange Commission investigation into expense reporting in FY 2013.

Consumer segment EBIT improved 19.1 percent in the quarter, however, due mainly to the reversal of a $17 million "earnout" related to RPM's 2012 acquisition of Kirker Enterprises, a maker of nail-care enamels.

The acquisition bookkeeping mechanism allows for performance-related payments to offset any shortfall in earnings, and Kirker has not been making its numbers since the acquisition. RPM blames excess investory and tightened consumer spending for the shortfall.

In January, RPM's Rust-Oleum Group bought Citadel Restoration and Repair Inc., a maker of concrete and wood deck floor coatings based in Minnesota.

The company does not expect dramatic improvement in the third quarter and, in fact, reduced its EPS guidance for the year to $2.25 from $2.30.

"In our industrial segment, we do not see a near-term turnaround in the European economies and expect continued strengthening of the U.S. dollar to continue negatively impacting results on translation," said Sullivan.

The outlook is better on the consumer side, where RPM expects stronger spending to bring home 6 percent sales growth in the second half.

And beyond that, Sullivan said: "From a longer-term perspective, we are optimistic given the return of our SPHC businesses and the elimination of their asbestos liability. We can now accelerate growth investments in our businesses and more aggressively return capital to shareholders when appropriate."