Despite the “bright future” of the construction and engineering industry, those at the helm are making less money, a new report says.

Executive pay, defined as total compensation (base salary, bonus and long-term compensation), has dropped eight percent since 2008, according to a new white paper by FMI, a global construction and engineering management consultant. 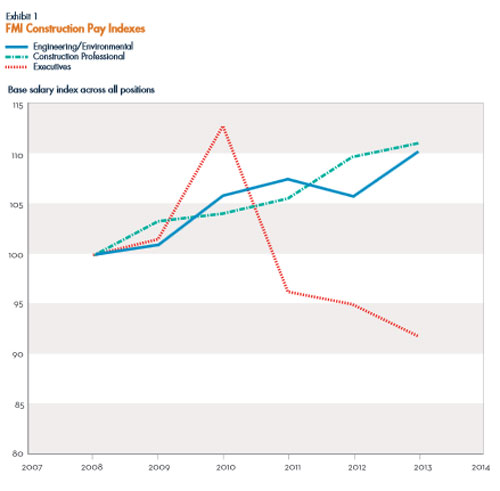 Photos: FMI, unless noted
Executive pay has dropped eight percent since 2008, the report says. The 2010 spike could reflect the impact of the American Recovery and Reinvestment (Stimulus) Act of 2009, which significantly increased construction activity.

“Executive Pay Trends” is the latest in FMI's annual series of compensation surveys and covers about 280 positions.

The results contrast with the findings of an October FMI study “Post-Recession Transformations,” which found an increase in the pay of professionals in construction and engineering. Professionals’ pay, which includes only base salary, has increased more than 10 percent.

Declines Due to Performance

Long-term compensation and total compensation are heavily influenced by profitability and have seen the sharpest declines for executive officers, according to the new report, authored by Mike Rose, Ph.D.

For example, the total pay for business unit construction engineering executives has declined 41.7 percent, while the pay for chief executives has dropped 17.2 percent in the years since 2008.

The news isn’t “all bad,” Rose reports, as “pay appears to be stabilizing” with the continued recovery from the Great Recession.

Executives at the Top

“An examination of the positions with the greatest base salary gains reflects the importance of cost control through effective contract management, bid procedures, procurement and logistics,” Rose writes.

Public relations and the building of positive images is also “not simply an important objective, but rather an imperative of the highest importance for the industry,” the report notes.

Financial and business unit executives have seen the steepest declines in bonuses, reflecting the consolidation of executive power into the corporate suite and away from the business unit.

Bonuses for business unit construction engineering executives have declined 73 percent, while those for chief financial officers slid 50 percent, according to the report.

The largest gains in bonuses reflect an emphasis on cost control, as well as project management.

Contract heads, in particular, show a significant increase in bonuses over five years. This position plays an important role in cost control and project performance, with companywide responsibility for developing contract requirements and bid procedures based on performance requirements, cost estimates and schedules, according the report.

In addition, project management head increases reflect the importance of the core function of completing projects successfully on time and on budget, the report notes.