Investigators are seeking the cause of a small explosion and fire at a Sherwin-Williams paint manufacturing plant in Canada.

One person reportedly suffered minor injuries in the incident, which occurred shortly before 2:30 p.m. Tuesday (Dec. 16) at an industrial park in Brantford, Ontario.

A Sherwin-Williams spokesperson said Friday (Dec. 19) that the company did not plan to issue a statement. 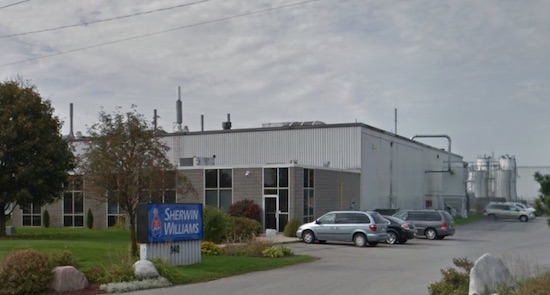 Screen grab via Google Maps Street View
A small explosion and fireball caused minor injuries to one employee at Sherwin-Williams' factory in Brantford, Ontario. Employees were evacuated, but returned to work the following day.

The Brantford location manufactures and distributes products for the wood finishing industry, according to the company's website.

Hardwick told media outlets that the explosion had caused a fireball to shoot out, but no one was burned. The explosion also blew out part of a wall, which was designed to blow out in this type of incident for venting purposes, he said.

Workers were evacuated, and police and firefighters put up barriers to the area, MyKawartha.com reported.

The injured employee suffered minor bruising after being pushed into a wall during the explosion. He did not require medical attention, according to BrantfordExpositor.ca.

There was no visible damage to the outside of the building.

Since there was an explosion, the Office of the Fire Marshall and Emergency Management was called in to assist with the investigation, according to BrantNews.com.

Hardwick said he was waiting for an OFM engineer and an investigator from the Technical Standards & Safety Authority, which specializes in pressurized vessels.

The plant returned to limited operation Wednesday (Dec. 17) in an area isolated from the damage.