The New York State Thruway Authority is seeking bids for painting and steel repair on the historic Castleton Bridge over the Hudson River.

The project involves cleaning and recoating about 430,000 square feet of structural steel on the 5,369-foot-long riveted truss structure.

Work will include coating structural steel on the lower portion of the main span with heights ranging from 28 to 61 feet above the bridge deck. 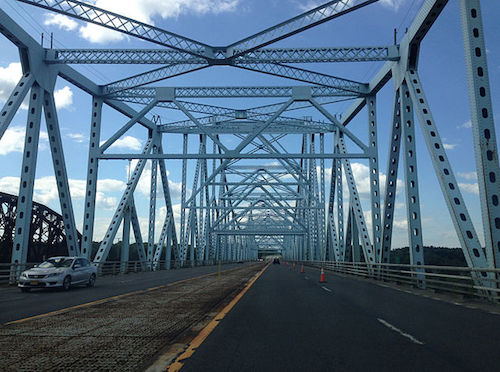 CC BY-SA 4.0 / Wikimedia / Famartin
The New York State Thruway Authority is seeking bids through Dec. 23 for work on the Castleton Bridge over the Hudson River.

The steel will require abrasive blast-cleaning to a Near-White finish (SSPC-SP 10), and will be recoated with an organic zinc-rich system. Structural steel repair will also be required.

Contractors must be SSPC-QP 1 and QP 2 certified. Containment will be necessary for the abatement of lead-based coatings.

The bridge opened May 26, 1959, to complete the Berkshire Connector of the New York State Thruway, which connects to the Massachusetts Turnpike. The Castleton Bridge most recently received a multi-lane ramp update from Interstate 787 North to Interstate 90 as part of a $145 million project to rehabilitate the Patroon Island Bridge.