London plans to bridge the River Thames with a public garden—an "incredibly daring" green idea that has many locals seeing red.

The £175 million (about $274.6 million USD) "Garden Bridge" will be the most expensive footbridge in the world, largely because of the copper cladding planned, civil engineers tell BBC.com.

Lined with hundreds of trees, the structure will also obstruct some views of venerable local landmarks, which has the locals "furious," says one critic.

Backers counter that the new addition to the rapidly changing capital skyline will be "absolutely iconic" and "recognized right across the world." 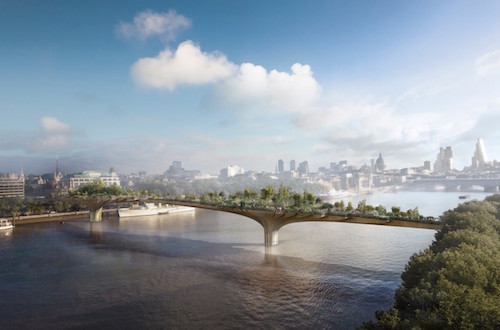 Heatherwick.com
Engineers say the £175 million project will be the world's most expensive footbridge.

The Westminster City Council approved the landmark project last week for its "significant public benefits, iconic design, increased connectivity, and for the creation of a large open space in London," a spokesman told ArchitectsJournal.co.uk.

"This is something that is iconic and absolutely unique, and will be recognized right across the world," said planning committee chairman Robert Davis.

The 366-meter (1,200-foot) bridge was previously approved by the Lambeth Council. The final step, approval by London Mayor Boris Johnson, is expected early in 2015.

The project is being managed by a UK nonprofit registered as the Garden Bridge Trust.

Pedestrians by the Millions

The project was sparked by a request by Transport for London to improve pedestrian links across the River Thames. TfL governs the transport system for Greater London, a 607-square-mile area with more than 8.1 million residents.

London has also become the world's top tourist destination, with more than 16.8 million visitors in 2013.

British actress and activist Joanna Lumley has championed the bridge, which was designed by architect Thomas Heatherwick. Heatherwick Studio is working with engineers at Arup and landscape designer Dan Pearson.

Johnson has already commited £30 million (about $47 million USD) to the project through TfL, according to the London Evening Standard. Construction is expected to start in late 2015, with completion expected in 2018.

The bridge will link north and south London; specifically, the South Bank area to Temple station and beyond.

The route will feature shrubs, flowers, plants, 270 trees, woodland and meandering walkways in a "ground-breaking design" that "will integrate a new kind of public space into the fabric of the city, adding to London’s rich and diverse horticultural heritage," according to the trust.

Maintenance will cost about £3.5 million (about $5.5 million USD) annually.

The trust calls the design idea "incredibly daring" with "the chance to walk through woodlands over one of the greatest rivers in the world."

An eight-volume Environmental Statement, non-technical summary and consultant's report on the project were published earlier this year.

The daring design will also obstruct some views of St. Paul's Cathedral and other landmarks, which has ignited some public criticism.

Critics have vowed an appeal to Communities Secretary Eric Pickles to "call in the application for a full public inquiry" or to initiate a judicial review of the City Council actions.

"Boris [Johnson] will obviously wave it through in coming weeks," Ball said. "But if any scheme anywhere is 'of more than local concern' (the formula for the Secretary of State calling the application in) it is this, affecting four local authorities, in the most delicate of spots, to be enjoyed by the whole world."

The new bridge is likely to accelerate the ongoing transformation of the London skyline, whose sweep takes in nearly 1,000 years of architecture and design.

The Garden Bridge Trust says it is working with local communities and stakeholders to address concerns and with planning authorities to ensure that all conditions are met.

"I am delighted with the news that Westminster City Council has shown its support for the Garden Bridge and approved our plans," said Lord Mervyn Davies, chairman of the trust.

"This iconic new project will create a new green space in the center of London and will be enjoyed by all."