Teflon? That's so 20th century. A new surface texture being developed by UCLA engineers reportedly "can repel all liquids, no matter what material the surface is made of."

Such a surface could have almost infinite applications, from corrosion prevention to antifoulings, solar panels and building exteriors, the researchers say. Scientists are also looking at a variety of biomedical and industrial applications. 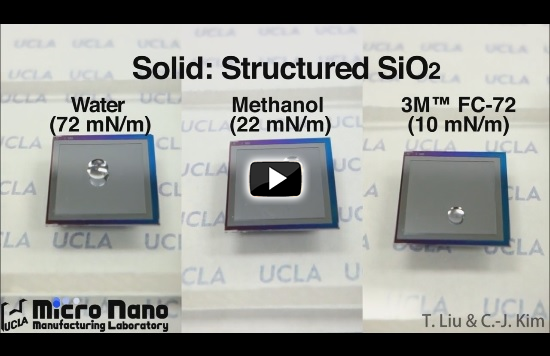 The technology relies on the repellent physical attributes of the texture, not the substrate, according to a research announcement from UCLA's Henry Samueli School of Engineering and Applied Science, where the project is underway.

"We show how roughness alone, if made of a specific doubly reentrant structure that enables very low liquid-solid contact fraction, can render the surface of any material superrepellent," the team writes in "Turning a surface suprerrepellent even to completely wetting liquids," just published in the journal Science.

Hydrophobic coatings (like Teflon and other nonstick surfaces) work by a combination of their chemical composition and making the material rough at the microscopic scale, the university explains. Those rough spots trap air at the surface, causing the water to bead up and roll around, like they do on some leaves.

“At the microscopic scale, the leaves’ surfaces are ‘hairy’ and points of contact with water are reduced,” said Chang-Jin “CJ” Kim, a UCLA professor of mechanical and aerospace engineering, and the study’s principal investigator.

“This reduction in points of contact means the water is held up by its own surface tension. Manmade superhydrophobic surfaces have been designed to take advantage of this phenomenon by forming microscale roughness or patterns on a hydrophobic material.”

But such coatings cannot repel oil-based liquids, which have a lower surface tension than water and will spread out rather than bead up.

Although scientists have developed some so-called oleophobic surfaces, even the best ones cannot prevent the collapse of liquids with extremely low surface tension, UCLA says. Those liquids include fluorinated solvents used in industrial applications.

Working with a completely wettable material (silica), the team micro- and nanostructured the surface to make it superomniphobic.

The engineers formed a surface covered with thousands of microscale flathead nails, each about 20 micrometers in head diameter (smaller than the width of a human hair) to resemble the appearance of existing superoleophobic textures.

They then tweaked nanoscale details of the nailhead design, building in an overhang that creates a reverse meniscus when liquids are on the surface and suspended between the nails.

The scientists then replicated their findings with identical surfaces of a metal and a polymer.

The surface also withstood temperatures over 1,000°C and resisted biofouling, the team reports.

“In a manned spaceship, you can see how a liquid will hold together as a sphere, and that’s because it’s completely surrounded by air, that’s the same idea here,” Liu said.

“On our textured surface, liquid sits on a cushion that is 95 percent air, and its own surface tension holds it up, so it can roll over the surface without collapsing.”