Self-healing coatings have long held promise—as long as the sun was out. Now, researchers have discovered a sweet secret that can bypass the need for UV power.

Sugar may be the critical ingredient in user-friendly self-healing polymers durable enough for military coatings.

That's the word from a Clemson University research group led by Materials Science and Engineering professor Marek Urban, who has dedicated years to research on self-healing polymers

From UV to Sugar

Previous research has relied on ultraviolet light to produce the healing chemical reaction. The new research uses sugar as the energy source, aided only by "natural levels" of carbon dioxide and water in the air.

"It's a huge difference," Urban said. 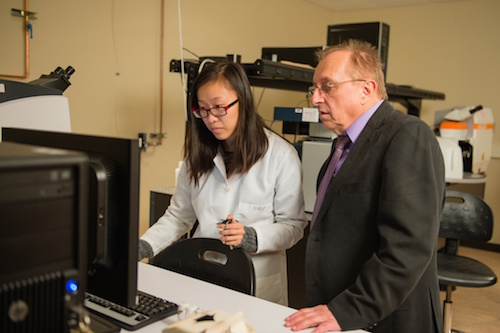 Clemson University
Marek Urban (right) is developing self-healing polymers that use sugar as an energy source.

"Before, we needed UV light. Let's say you drive a car in Florida and it gets hit by a rock. If the sun is shining, it's going to self-heal," Urban explained.

"But if you drive a car in Michigan or somewhere there is less sun exposure, it will take a long, long time. Now all you need is carbon dioxide and water."

Urban's work is part of a demonstration project by the Department of Defense's Corrosion Prevention and Control Program.

Hangar doors at the Corpus Christi Army Depot in Texas are being coated with a polyurethane that incorporates additives that enable the self-repairing mechanisms.

Richard Lampo, a materials engineer with the U.S. Army Engineer Research and Development Center, is evaluating Urban's research for use in highly corrosive environments.

"Corrosion of infrastructure and equipment costs the military millions of dollars each year," Lampo said.

"Coatings are the first line of defense against corrosion, and a coating that repairs itself when damaged, thus maintaining a barrier to the effects of corrosion, could potentially equate to significant cost savings while maintaining a high level of mission readiness."

Urban said his focus has been on making a self-healing polymer technology that is user-friendly for the industry.

"Our process is simple and based on the existing materials," he said. "You don't want to build a new factory to make polymers that are self-healing. You would like to take existing technologies to another level."

Urban and a member of his research group, doctoral student Ying Yang, described their findings in a paper published in the German scientific journal Angewandte Chemie.