A team of Stanford University engineers says it has designed, constructed and tested an earthquake-resistant house that may render residential earthquake insurance obsolete.

The house is capable of withstanding a quake with three times the power of the destructive 1989 Loma Prieta temblor, which measured at 6.9 magnitude on the Richter Scale, Stanford University reported in an announcement on the research. 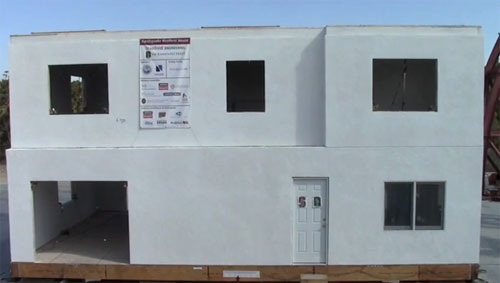 The house is equipped with inexpensive design modifications, including reinforced walls and sliding isolators that allow the structure to skate along the trembling ground instead of collapsing, said project leader Gregory Deierlein, Stanford’s John A. Blume Professor in the School of Engineering.

These modifications could be incorporated into new homes as soon as designers and builders decide to use them, the team says. The technology may also lead to building code changes.

The Toll on Homes

“Residential homes already do a good job of keeping the people inside safe when a temblor hits,” according to the university. However, seismic activity typically does a lot of minor structural damage.

For example, after the 1994 Northridge quake, most of the $25.6 billion repair tab was spent on fixes to 500,000 residential structures, the university noted.

Even if the walls of a home stay up in a quake, interior drywall and stucco, as well as cabinetry and other architectural fixtures are often damaged because of the violent sideways movements, Deierlein said.

In lieu of a conventional foundation, the new structure rests on a dozen steel and plastic sliders that measure 4.5 inches in diameter, according the announcement.

Under the sliders are plates or bowl-shaped dishes made of galvanized steel. The dishes are known as “seismic isolators.”

“The idea of seismic isolation is to isolate the house from the vibration of the ground,” said Eduardo Miranda, an associate professor of civil and environmental engineering. “When the ground is moving, the house will just slide.” 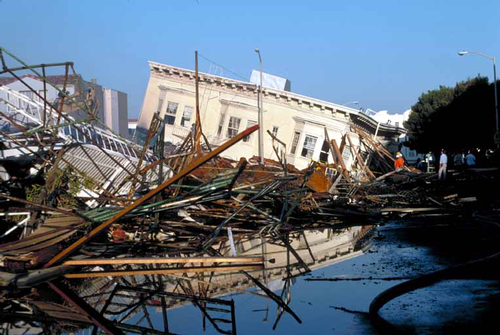 USGS
The team developed the home 25 years after Loma Prieta, which hit Oct. 17, 1989, in the San Francisco and Monterey Bay Regions.

His team adapted the technology for residential use by incorporating inexpensive materials into the scaled-down isolators.

The home also features a “unibody design,” a term borrowed from the automobile industry, in which every element of the structure contributes to its strength, according to the university.

Unlike typical construction, where drywall is screwed into the wood framing, the team used glue to affix 5/8-inch-thick drywall more securely to the framing.

On the exterior, they used strong mesh and additional screws to attach the white stucco tightly, the team noted.

These elements reportedly made the house stiffer and stronger, leading to a significantly better seismic performance.

The team tested the three-bedroom, 36-by-22-foot house using the largest earthquake simulator in the country, the Large High Performance Outdoor Shake Table at the University of California, San Diego.

The facility uses computer-controlled hydraulic pistons to move the platform back and forth in a pattern selected by the engineers, so it can mimic specific earthquakes like the Loma Prieta.

It took the team seven weeks to build the boxy test structure. Testing was executed in September.

The engineers shook the table at three times the intensity of the ground shaking during Loma Prieta, which hit Oct. 17, 1989, in the San Francisco and Monterey Bay Regions.

The house slide from side to side atop the sliders but remained intact, the researchers reported.

“Under the isolators, the house basically saw no damage,” Deierlein said.

The team also bolted the home to the shake table to test the unibody design system separately. They developed computer models to predict when the house would fall, but it outperformed their expectations, the team says.

Under the triple-Loma Prieta conditions, a few cracks appeared in the stucco and drywall, and a swinging light in the garage shattered. The test window and steel door stayed put, as did the table and chair that furnished the test house, the university related.

The unibody method would only add a few thousand dollars to the cost of building a home the size of the test home, Miranda said. By comparison, earthquake insurance typically has high deductibles and premiums over $600 a year, Deierlein noted.

Both technologies could also be used to retrofit existing homes, but would be much easier to incorporate in new construction, the report related.

"We are always cautious never to talk about earthquake-proof," Deierlein said, "but our resistance is getting better and better."

Editor's Note: This post was updated at 2 p.m. ET, Nov. 21, 2014, to correct reference to insurance costs in California.