Researchers in Hong Kong say they have developed drones capable of collecting pollution and turning it into fuel.

The development hinges on a special carbon-absorbing coating technology that would be used to paint the drones.

The drones (or "parasitic robots") would work by perching on neon billboards throughout the streets of Hong Kong, according to their developer, NAS-DRA (Nonlinear Architectural Systems Design and Research Agenda).

During the day, the drones would stretch out their wings and collect pollution, passing it through a special polymer coating known for its ability to absorb carbon. 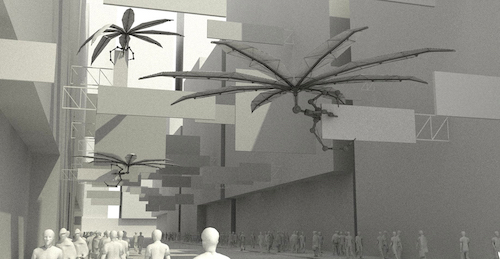 NAS-DRA
Developers of a new drone say it would use a special polymer coating to absorb pollution during the day, then release it as CO2 at night to collect and use for energy production.

At night, the machines would attach to lighted billboards, using the neon lights to heat the polymer to release the CO2, which would then be collected and used to produce energy.

The coating technology, still under development at UCLA in California, is based on polyethylenimine (PEI). That's an organic polymer that the company says is "inherent in the process of detergent, cosmetics production or employed as a wet-strength agent in [the] paper-making process."

Scientists at UCLA were looking for the best and most porous material to impregnate with polymers. They discovered that fumed silica gave the highest CO2 absorption "ever reported in the real-world conditions where the air contains moisture," according to NAS-DRA.

Once the coating has absorbed as much CO2 as possible, the process can be reversed: heating the material in the air to 85°C (185°F) gives high-concentrated air (2-5 percent CO2), or heating it in a vacuum to the same temperature gives pure CO2.

The drones also work as mini farms, and the CO2 helps plants on their wings grow.

"The plants and robot work as a hybrid, because the main goal is to reduce CO2," Michal Jurgielewicz, an architect with NAS-DRA, told Fast Co.Exist.

According to Jurgielewicz, the plants are harvested by humans using hydroponic farming.

"We're aware that urban conditions can be harsh and growing the plants for food can be difficult. It should be adjusted to the place and condition, so using sensors, one can modify how plants should be grown," Jurgielewicz said.

The robots would make fuel to run themselves, by both using organic waste from the plants and extra CO2 from the polymer to produce methane and other gases.