A Wooden Wonder Planned for MN

The T3 project planned for an area near downtown Minneapolis will be the first modern American high-rise to be constructed entirely out of wood, according to various reports.

The plans for the building, named T3 to reflect its three key elements: timber, transit and technology, were unveiled earlier this month by its Houston-based developer, Hines Interest LP. 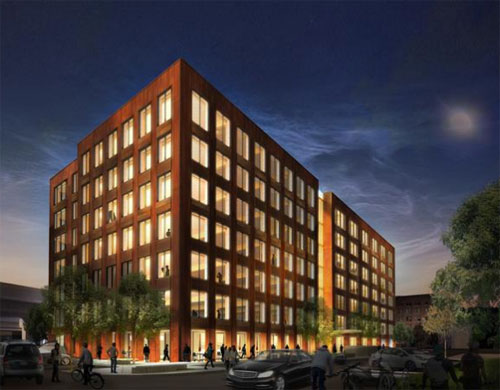 Hines Interest
The seven-story building will feature engineered wood material, created by melding together smaller timbers from younger trees in its structure and interior, devolopers say. The exterior cladding will be corrugated weathering steel, which will change color as the building ages and is exposed to nature’s elements.

While funding for the project has been secured, the city’s preservation and planning agencies still must approve the project, local reports say.

Costs of the project have not yet been released.

Timber has not been used to construct tall buildings in the U.S. in several decades.

Many cities have building codes that limit the height of wood structures to no more than six stories due to long-standing concerns about wood catching fire more easily and buckling under pressure in floods or earthquakes, according to the Wall Street Journal.

However, proponents of wood construction say that state of technology for these types of wooden skyscrapers has advanced.

Fire-protective coatings can be applied to timber frames and wood can be engineered to make it as durable as concrete, the WSJ reports, citing architects.

A report by Skidmore, Owings & Merrill, a firm that has designed many landmark skyscrapers, suggested that timber could be used to build a structure as tall as 42 stories or 395 feet high, the report added.

Developers of T3 plan to begin construction in early 2015, with a scheduled completion for spring 2016.

Hines’ Director Bob Pfefferle says the building will be greener and built faster than other types of construction, according to the Minneapolis / St. Paul Business Journal.

Engineered wood material, created by melding together smaller timbers from younger trees, will be used for its structure and interior.

Moreover, the building will not struggle with inefficient heating and cooling issues and other problems that plague its neighboring century-old warehouses, it will, however, mimic their design style, news reports say.

“It’s marrying the coolness of the old with the modern through this technology,” Steve Luthman, Hines senior director told the Star Tribune.

T3 will include modern amenities of new office buildings. In addition to offices, a roof-top deck, bike repair and storage facility, fitness center, underground parking garage, and retail spaces are planned for the project.

Its exterior cladding will be corrugated weathering steel, which will change color as the building is exposed to nature’s elements and ages, the reports say.

In this TED talk, Green explains “Why we should build wooden skyscrapers.”

It stands six stories high and cost $25 million to construct.

Wood and new wood technologies for tall building construction are also the focus of a $2 million federal contest recently sponsored by the U.S. Department of Agriculture.

“There is a breadth of wood-related building science, design and construction that’s underway internationally,” according to Marc Brinkmeyer, Softwood Lumber Board Chair. The board is one of the contest partners.

“In recent years, we’ve seen a number of buildings over seven stories constructed around the world, including the 10-story Forte building in Melbourne, Australia, and the 14-story Treet building in Bergen, Norway,” Brinkmeyer says.

“The opportunity to learn from what’s been done elsewhere, and build on it here in the U.S., is very exciting for our industry, our employees and communities.”

Entries into the Tall Wood Building Prize Competition will be accepted until Dec. 8.