Major coating suppliers have been increasing their global operations outside the U.S., with recent expansions throughout China and the Middle East.

Recent months have seen new plants for AkzoNobel in Changzhou, China and Dubai; a new PPG facility in the Henan Province of China; and a new BASF plant in Shanghai. 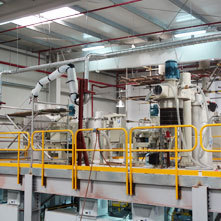 The new factory adds about 25 million liters of capacity for the Sikkens, Lesonal and Prime products.

"The Changzhou site is designed to help us meet rapidly increasing customer demand—not only from domestic suppliers, but also from our global automotive customers that have business in China," said Simon Parker, managing director for the Vehicle Refinishes business.

According to Parker, the Chinese vehicle refinishes market is worth around €750 million (about $930 billion USD) and has been growing about 10 percent each year.

AkzoNobel also has launched operations at a new powder coatings plant in Dubai that will "significantly increase" capacity for the Interpon and Resicoat products, the company announced.

The manufacturing plant is AzkoNobel's sixth  in the Middle East and its 30th plant worldwide to produce powder coatings. The company is active in 15 countries in the Middle East, where it employs over 800 people.

The plant will target growing regional demand for functional products used in the oil and gas and construction markets, as well as decorative powder coatings, particularly in the architectural sector.

The plant includes the latest ventilation technology and off-gas treatment to ensure a clean environment; and closed handling of ingredients.

"Our new plant is designed according to the latest and most environmentally friendly manufacturing processes and technologies," said Peter Fischer, senior vice president of coatings solutions for Asia Pacific.

"Our innovative processes and high-performance automotive coatings help our customers achieve their efficiency targets and to stay competitive."

The new plant is adjacent to another new BASF resin and electrocoat plant, which plans to start operating in the second half of 2015.

PPG Industries and Henan Billions Chemical Co. announced the completion of a 366,000-square-meter titanium dioxide (TiO2) manufacturing and research facility in the Henan Province of China.

The facility will manufacture "significant volumes" of TiO2 using a chloride-based process. Production is scheduled to start in the first quarter of 2015, and the plant is expected to produce up to 100,000 metric tons of TiO2 per year.

PPG plans to use the TiO2 to produce paints and other coatings.

The new site also features a 12,000-square-meter enterprise technology center, which will allow the two companies to collaborate on accelerated development, testing and qualification of TiO2.

The completed facility follows a 2012 agreement under which PPG licensed certain chloride-based technologies to Henan Billions and established a long-term agreement to purchase TiO2 from the company.

"PPG values its partnership with Henan Billions and is pleased with the additional resources the new facility will provide for both companies," said Charles Kahle II, PPG's chief technology officer and vice president of coatings research and development.

"The pre-production batches at the facility have scaled up well, and we are in the final stages of qualifying commercial quantities of product. With the quality demonstrated to date, PPG plans to significantly increase its purchase of TiO2 from the facility."