PPG announced completion of the second-largest acquisition in its history just days after reporting approval of the plan by Mexican regulators.

The Pittsburgh-based manufacturer announced late Wednesday (Nov. 5) that it now held the billion-dollar Latin American business of Consorcio Comex, based in Mexico City. 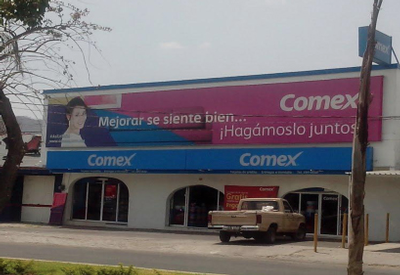 Photos: PPG
A major manufacturer of architectural and industrial paints and coatings, Comex reported sales of approximately $1 billion in 2013.

The deal gives PPG, already the world's largest paint and coating maker, a huge foothold in the booming Latin American coatings market—a rare area where the Pittsburgh company had had little presence.

The Federal Economic Competition Commission of Mexico green-lighted the deal in mid-October, clearing the way for completion.

Founded in 1952, Comex manufactures coatings and related products in Mexico and sells them in Mexico and Central America through more than 3,700 stores that are independently owned and operated by more than 700 concessionaires.

Comex also sells its products through regional retailers and wholesalers, and directly to customers. The company has approximately 3,900 employees, eight manufacturing facilities, and six distribution centers. Comex reported about $1 billion in sales in 2013.

“We are pleased to have successfully completed this acquisition, the second-largest in our company’s history, as it adds a leading architectural coatings business in Mexico and Central America to our portfolio,” said Charles E. Bunch, PPG chairman and CEO. “We look forward to working with the Comex team as we integrate the business into PPG.” - See more at: http://corporate.ppg.com/Media/Newsroom/2014/PPG-completes-acquisition-of-Comex#sthash.NXD9KyEl.dpuf

The massive PPG deal sailed through without a hitch in just four months, after The Sherwin-Williams Co. struggled for nearly two years to make the same deal.

PPG first announced its bid for Comex on June 30. In October, the company said antitrust regulators needed more time to review the deal. On Friday (Oct. 31), however, PPG announced that Mexico had blessed the deal.

And by Wednesday, the ink was dry.

By contrast, Sherwin-Williams announced its $2.34 billion bid for Comex in November 2012.

Over the next 16 months, Mexican regulators twice shot down the biggest part of the deal: the purchase of Comex's Latin American business. (Sherwin-Williams, the largest U.S. paint retailer, completed the acquisition of Comex's North American business last year.)

Finally, in April, Sherwin-Williams gave up on the deal, quickly spurring a lawsuit by Comex shareholders.

It may never be clear why the PPG bid did not raise the same concerns with Mexican regulators that the Sherwin-Williams proposal did. In any case, PPG was jubilant over the deal, said Charles E. Bunch, PPG chairman and CEO.

“We are pleased to have successfully completed this acquisition, the second-largest in our company’s history, as it adds a leading architectural coatings business in Mexico and Central America to our portfolio,” said Bunch.

“We look forward to working with the Comex team as we integrate the business into PPG."