Dream Home has a Nightmare Glitch

Mark and Brenda Voss's gorgeous new $680,000 oceanfront home in Florida has everything they ever wanted—except the lot underneath.

Six months after the three-story custom Palm Coast home was completed, the owners learned that their 5,000-square-foot vacation retreat was built on the wrong lot.

The lot that the Vosses purchased for their home two years ago in the gated resort community is actually next door. 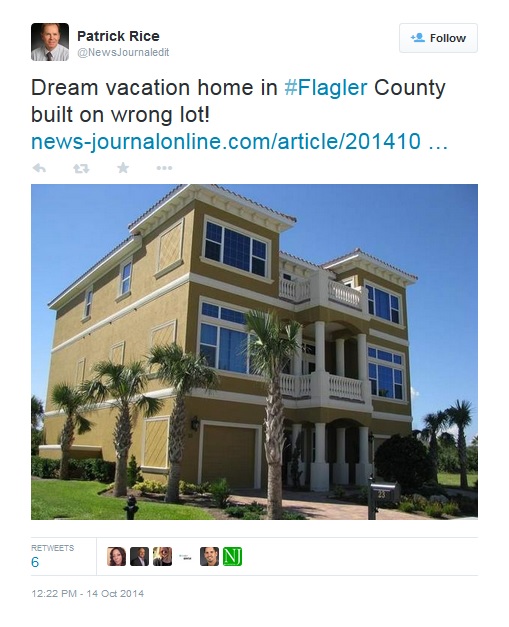 Twitter / @newsjournaledit
Mark and Brenda Voss own more than a dozen lots in the gated resort community of Ocean Hammock. Their new 5,000-square-foot custom home is not on any of them.

The $355,000 lot on which the Vosses' home stands is owned by a North Carolina couple, reports said.

“We are in total disbelief, just amazed this could happen,” Mark Voss told the Daytona Beach News-Journal.

Voss's amazement is understandable: He and his wife actually own 18 other residental lots in their development, and their new home is not on any of them.

The Vosses are from Missouri, where Mark Voss owns a property management and real estate company.

The home was built by Keystone Homes, a luxury homebuilder based in Ormond Beach, FL. The company did not respond Thursday (Oct. 30) to a request for comment.

The builder and Voss told the News-Journal that the gaffe stemmed from a surveying error in 2013 by East Coast Land Surveying Inc., also of Ormond Beach, FL.

The surveyor "misplaced stakes, and the foundation survey and other documents and building activity were based on the error," the news outlet reported.

Mark Boyce, the county's chief building official, told the News-Journal that the county had relied on the surveyor. But several news reports noted that the area where the house was built consisted of unmarked, empty lots.

Move It or Lose It?

News reports say the Vosses and the builder are trying to work out an agreement to buy the lot on which the house sits.

If not, the Vosses may face the same fate that befell a Rhode Island couple earlier this year.

In that case, a state Supreme Court judge ruled in June that the couple's $1.8 milllion waterfront home in Narragansett would have to be torn down because it was built partially on property owned by another family and designated for public use as a park.

That survey was conducted in 2009, and the house was built in 2011, but the lot mistake came to light only recently when the developer tried to sell the property, reports said.