And the winner of an $899 million design-build contract to replace 558 Pennsylvania bridges in three years is...

The Pennsylvania Department of Transportation (PennDOT) announced Friday (Oct. 24) that it had selected the Plenary Walsh team's proposal from among four plans invited in March for the mega-project. 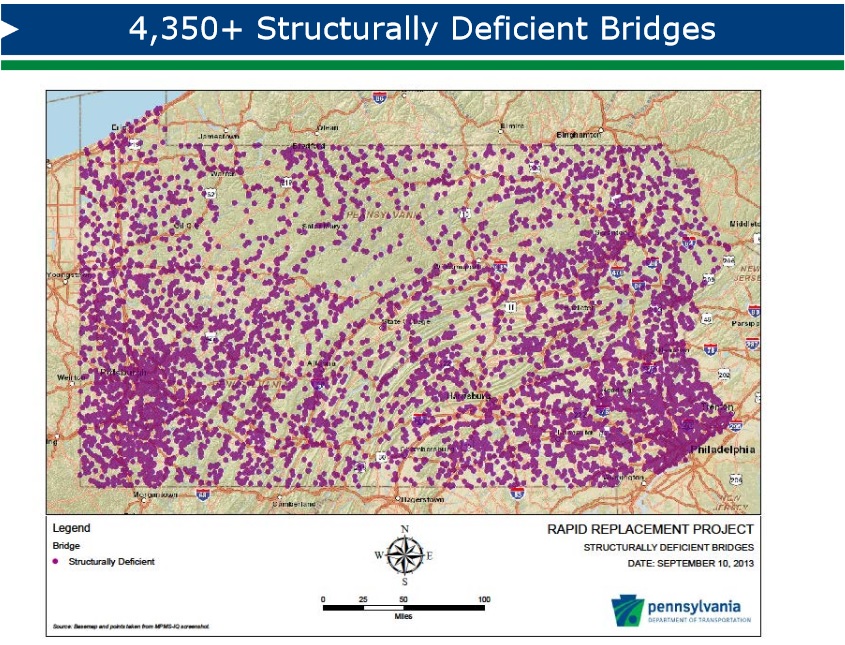 Photos, graphics: PennDOT
Pennsylvania has the third-largest number of structurally deficient bridges in the United States. Hundreds have been closed, and weight limits were imposed last year for 1,000 others.

Pennsylvania has the third-largest number of structurally deficient bridges in the United States. Hundreds of bridges have been closed in recent years statewide, and weight limits were imposed in August 2013 on 1,000 addition spans.

Under the contract, Chicago-based Walsh serves as lead contractor; Plenary Group as infrastructure investor; Omaha, NE-based HDR as lead engineer; and Granite Construction as a contractor.

Walsh maintains a Pennsylvania office in Pittsburgh, and HDR has locations statewide.

The other teams that had competed for the project are:

The whopping single contract is part of PennDOT's Rapid Bridge Replacement Project, a public-private partnership (P3) initiative. The P3 Board, created in 2012, approved the project 13 months ago.

Under the contract, Plenary Walsh Keystone Partners will manage design, construction and 25 years of maintenance for each bridge after replacement.

PennDOT will be responsible for routine maintenance, such as snow plowing and debris removal, and the state will retain ownership of the bridges.

Plenary Walsh is also responsible for financing the effort.

PennDOT will also tie performance-based payments to the contract, based on the contractor’s adherence to the terms.

A 235-page Executive Summary of the Plenary Walsh project plan is available here.

A redacted Executive Summary of the Plenary Walsh financial plan is available here.

The final list of bridges covered under the contract is available here.

The project will cost an average of $65 million annually for the 28-year contract term, officials said.

The average cost per bridge for design, construction and maintenance is $1.6 million, PennDOT said, compared with more than $2 million per bridge under the agency's standard process.

Schoch said the project reflected "strong commitment" by Gov. Tom Corbett "to taking innovative steps to bring improvements to the state’s roads and bridges more quickly and at reasonable cost."

“This agreement helps Pennsylvania take a big step to cutting further into its backlog of structurally deficient bridges.”

Schoch announced the award just days before Corbett stands for re-election in Pennsylvania. The governor has trailed his Democratic challenger for months in the campaign.

Under the contract, the team must begin construction in summer 2015 and complete the replacements within 36 months.

The Pennsylvania subcontractors identified in the team’s proposal are:

Schoch said the team and state were working to minimize the project's impact on the traveling public.

He added: "This team has thoroughly detailed their traffic control plans and expects to finish construction eight months earlier than required.”