Solar Project Crew Gets $2M in Back Pay

Painters, bridge crane operators and other skilled laborers will share $1,914,681.50 in back wages and benefits they are owed for months of work on a solar energy project in a Nevada desert, the U.S. Department of Labor has announced.

The back pay will go to 147 workers for Henderson, NV-based Proimtu Mmi-Nv LLC, a subcontractor providing construction services at the federally funded Crescent Dunes Solar Energy Project in the Tonopah desert.

Investigators said that from June 2013 through April 2014, Proimtu Mmi-Nv failed to pay workers the correct prevailing wage rates and fringe benefits for their job duties. 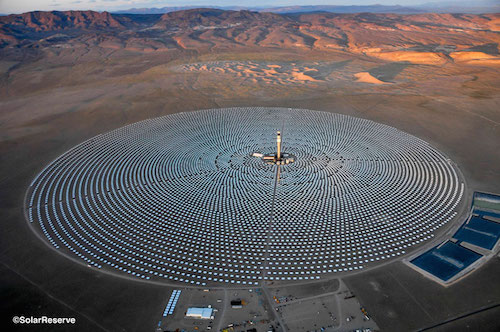 SolarReserve.com
Proimtu Mmi-Nv, subcontractor on the Crescent Dunes Solar Energy Project, will pay nearly $2 million in back pay to 147 workers who were shorted on wages and benefits, DOL reported.

Crescent Dunes is a 110 MW solar energy power plant that will power up to 75,000 homes during peak electricity periods. The project is being developed by Santa Monica, CA-based SolarReserve.

According to the DOL, the contractor paid "general laborer" rates to workers who regularly performed skilled trades duties, such as painting, bridge crane operation, electrical work and ironworking.

Those jobs should have commanded fringe benefits and prevailing wages of up to double what they were actually paid.

With $737 million in federal loan guarantees, the project is subject to specific requirements under the Davis-Bacon and Related Acts.

The loan guarantees are from the U.S. Department of Energy under the American Recovery and Reinvestment (Stimulus) Act of 2009.

DBRA applies to contractors and subcontractors working on federally funded or assisted contracts exceeding $2,000 for the construction, alteration, or repair (including painting and decorating) of public buildings or public works.

Under the act, laborers and mechanics are to at least receive locally prevailing wages and fringe benefits, as determined by the Department of Labor, for corresponding work on similar projects in the area.

"The money we've recovered for these workers is not a windfall—it is their hard-earned pay that their employer was legally obligated to pay them but did not," said Dr. David Well, administrator of the DOL's Wage and Hour Division.

"Companies that benefit from federal funding must see to it that the money is used properly, and that their workers are compensated according to the law."

Proimtu Mmi-Nv also has to now properly classify its workers by paying them the correct prevailing wages and fringe benefits for all hours worked, including overtime, as required.

The company also agreed to raise awareness about prevailing wages with other employees working at the Crescent Dunes project.