After spending six years testing more than 100 coatings, federal researchers have learned a lot about what works, and what doesn't, in fighting invasive marine species.

And while most coatings tested still aren't able to keep these pests from plugging up the nation's water and hydropower structures, two experimental formulations and one commercially available coating are showing promise, the Bureau of Reclamation has concludes.

Now, the agency says, testing is underway on experimental formulations to see how they handle the quagga and zebra mussels that attach to water and power facilities.

"Coatings for Mussel Control—Results from Six Years of Field Testing," released Oct. 21, reports on testing that started in 2008. The goal was to identify a coating that could combat the invasive species plaguing water and hydropower infrastructure. 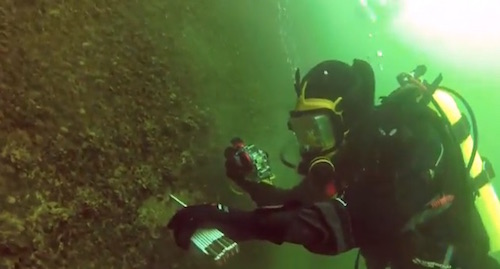 The tests were conducted at Parker Dam on the Colorado River, where invasive mussels reproduce all year and have a high growth rate.

Each coating system was tested in static and flowing water conditions, and the systems were evaluated about every six months, usually in May and November.

Many of the commercially available coatings that were tested are marketed for the marine shipping industry. The government study set out to determine whether these systems could hold up under the unique challenges facing the agency's infrastructure.

"Though we have tested many different coatings, three durable foul-release coatings are showing promise in managing mussels," said Skaja.

Two of those systems are newly developed experimental coatings. The third is a silicone foul-release coating, which was found to be the "most promising" for deterring mussel attachment in flowing and static water, the study said. The coatings can be easily cleaned with "no measureable force," even when aquatic vegetation and algae provide a surface for attachment.

Silicone epoxy allowed mussels to attach, but the coatings were easily cleaned for the first 12 months of exposure. Two experimental formulations prevented mussel attachment for the first 18 months. The coatings will undergo further testing.

In fact, several of the silicone foul-release coatings remained mussel-free for the entire six years.

"Suprisingly, laboratory tests suggest that silicone foul-release coatings have superior erosion resistance compared to epoxy coatings for sediment- and silt-laden waters and, in this respect, are comparable to ceramic epoxies."

The down side, however: "Unfortunately, silicone foul-release coatings are soft and are easily damaged."

However, the team said, they may perform well in settings not exposed to impact by heavy debris.

"To date, MERL has not found a commercially available durable foul-release coating that prevents mussel attachment," the study reported.

The researchers started testing experimental coatings systems in December 2012, because the commercially available ones were not preventing mussel attachment. The department signed material transfer agreements for 14 experimental formulations in 2012 and additional five in 2014.

"We've been focusing on finding coatings that are more durable with slightly different chemistries that would allow them to maintain their foul-release performance while giving a harder surface that's more durable," said David Tordonato, a materials engineer for the bureau.

Two of these systems "show promise" as durable foul-release coatings that prevent mussel attachment or are self-cleaning.

The bureau has entered into a Cooperative Research and Development Agreement with an industrial partner to develop a durable foul-release coating.

A report on these two coatings is expected later in 2014, according to JPCL's August 2014 article, "Coating Maintenance Challenges at the Bureau of Reclamation."

The researchers questioned whether silicone oil additives found in commercially available coating systems were essential for foul-release efficacy. One manufacturer agreed to formulate an oil-free version of the coating that was placed in testing in July 2012.

According to the study, the coatings without silicone oil did not allow mussels to attach to the surface—a "new discovery" that could lead to coatings developed with approved drinking-water applications, the team said.

"This also suggests that as long as the silicone foul-release coatings are not damaged, they will perform for the life of the coating," the researchers said.

The discovery also suggests that foul-release coatings work differently in freshwater than in marine environments, which could lead to coatings formulated specifically for freshwater immersion.

The Rest of the Pack

Low coefficient-of-friction coatings were not designed to prevent mussel attachment, but some were found  to have a lower release force than most of the durable foul-release coatings. However, the coatings allowed mussels to attach and were not self-cleaning under the testing conditions at Parker Dam.

Researchers evaluated five fluorinated powder coatings designed as "non-stick" coatings and found that mussels attached to all of the coating systems. The coatings were "moderately durable" and could offer some resistance to abrasion, impact and gouging damage.

Three products designed as anti-ice coatings were tested: a polyurea, silicone polyurea and a room temperature vulcanization (RTV) silicone. The polyureas allowed 90 percent and 100 percent mussel blockage, respectively, within one year. While the RTV silicone allowed mussels to attach, removal required little force. Additionally, the RTV silicone is tougher than silicone foul-release coatings. However, the coating studied did not meet federal VOC requirements and can't be recommended for use.

Out of three silicone anti-graffiti coatings tested, two were "significantly" more durable than the silicone foul-release coating. However, mussels and aquatic plants attached to the coatings resulting in about 85 percent blockage. The systems were removed from the test after one year.

A molybdenum-disulfide based epoxy coating exhibited 100 percent blockage and required more force to remove mussels than many other systems.

All of the antifouling paints had a limited service life of one or two years in flowing water, and all of the systems were withdrawn "due to the superior performance of nontoxic silicone foul-release coatings." Researchers said they would evaluate antifouling coatings again only if the manufacturer can prove there are no environmental or ecological impacts.

At first, copper, brass and bronze alloys all kept mussels from attaching, but once they adhered, they really stuck. After two years, brass began heavy mussel attachment; copper was the most effective at staying mussel-free but also exhibited 1.25 mils of metal loss per year.

In a quasi-static environment, zinc-rich primers only allowed a few mussels to attach. However, in flowing water, all of the primers evaluated had "significant mussel colonization." The samples were removed after seven months.

Zinc metallic coatings were also removed after seven months because they exhibited 50 to 100 percent blockage.

A biodegradable polymer sheet of polyglycolic acid (PGA) was evaluated in July 2012 and allowed a few mussels and plants to attach. "PGA is a strong plastic that slowly hydrolyzes and would have finite service life; however, since it is a plastic and is not suitable as a coating, it may have limited use for Reclamation," the researchers noted.

Over the last few years, Skaja and Tordonato documented the study in several articles published in the Journal of Protective Coatings & Linings:

Editor's Note: This post was updated at 4:25 p.m. ET Oct. 31, 2014, to reflect additional clarification provided by the U.S. Bureau of Reclamation.