Most U.S. construction companies are reporting difficulty in filling openings for key craft workers, including painters, a new survey finds.

Eighty-three percent of responding firms are having a hard time filling craft worker positions, while 61 percent report trouble in filling professional positions, according to the survey. 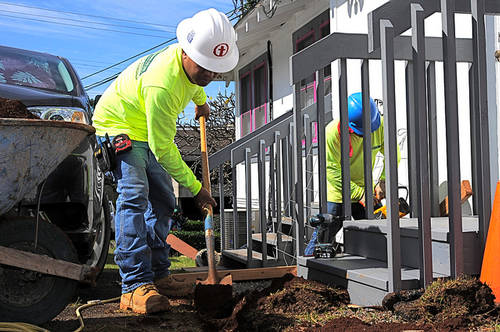 AGC
The Associated General Contractors of America say that a growing number of locations and construction segments are having difficulty finding workers with needed skills.

Thirty-seven percent of companies reported a shortage of painters.

To address the shortages, many firms are changing the way they operate, including using more subcontractors (48 percent) and staffing companies (37 percent) to get work done.

Worker shortages appear most severe in the Southeast, where 86 percent of contractors report having a hard time finding qualified workers.

Eighty-four percent of contractors in the Midwest, 82 percent in the West; and 67 percent in the Northeast reported difficulty finding workers, AGC said.

More than 1,000 firms responded to the 2014 Workforce Survey conducted in August and September.

Nationwide, 55 percent of firms say the local pipeline for preparing new craft workers is “below average or poor.”

Meanwhile, 35 percent of firms have a low opinion of the local pipeline for construction professionals.

“Considering how much the nation’s educational focus has moved away from teaching students career and technical skills during the past few decades, it is easy to understand why the construction industry is facing such severe labor shortages,” Ken Simonson, chief economist for the AGC, said in a statement.

Therefore, association officials are calling for new career and technical school programs, as well as other measures, to offset the labor shortages.

The AGC has a created a workforce development plan in response to the growing problem.

“Preparing the Next Generation of Skilled Construction Workers: A Workforce Development Plan” identifies steps to reinvigorate the pipeline for new construction workers. Options include greater funding for vocational education and making it easier to establish construction-focused schools.

During a visit to the ACE Academy, a construction-focused public high school in Portland, OR, the economist commented, “Schools like this should be the norm, not the exception.”