China’s president is not a fan of distinctive design and construction techniques.

The country’s construction boom has led to a plethora of unusual architecture forms, often designed by Western firms. Some have attracted admirers; others, ridicule. 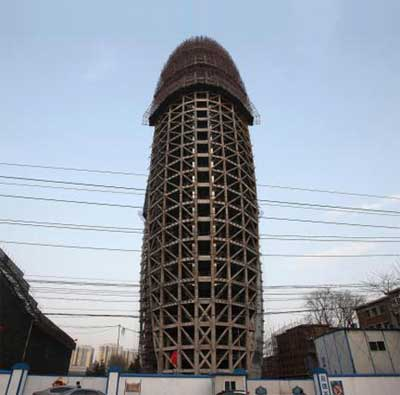 During a literary symposium, the president called for fewer odd-shaped buildings, according to the news report, as translated by deZeen.

The president's “weird” architectural targets include the China Central Television headquarters in Beijing, designed by OMA; the phallic-shaped headquarters of The People’s Daily; and two bridges in Chongqing, reports deZeen.

The CCTV headquarters has been nicknamed “big underpants,” while the newspaper headquarters and bridges have been compared to male and female genitals.

The president said artists and designers should not sacrifice their creative and moral values for commercial gain, according to deZeen.

According to Xi, good architecture and art "should be like sunshine from the blue sky and the breeze in spring that will inspire minds, warm hearts, cultivate taste and clean up undesirable work styles."

While the leader has not issued a ban on such high-profile building projects, he has spoken out against glamorous governmental buildings.

“Glitzy new government buildings, sometimes in impoverished areas, have been a source of public outrage,” according to the BBC.

The directive includes the purchase, restoration or expansion of office compounds that are done under the guise of repair work or urban planning, according to the Xinhau News Agency.