Weeks of delays in bridge painting work have already cost a Michigan contractor $85,800, and the tab is growing with each day the work isn't completed.

The growing bill, from the Ohio Department of Transportation, involves an $11.1 million job by Atsalis Brothers Painting on the Craig Memorial Bridge in Toledo, OH.

After last winter's rough weather and frigid temperatures, ODOT extended the project completion deadline to Sept. 12. But Warren, MI-based Atsalis missed that date, so four-figure penalties have been accumulating daily, according to ODOT.

"We are assessing liquidated damages at a rate of $2,600 a day," said Theresa Pollick, public information officer for ODOT District Two. 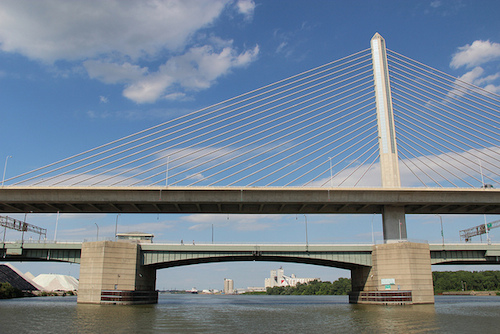 Flickr.com / cmh2315fl
The Craig Memorial Bridge carries Route 65 over the Maumee River. It previously carried Interstate 280, until the road was rerouted onto the new Veterans Glass City Skyway Bridge.

The department assessed $46,800 in liquidated damages as of Oct. 1; it recently tacked on an additional $39,000 to cover delays through Oct. 15, according to Pollick.

Atsalis did not respond Tuesday (Oct. 21) to a request for comment.

Pollick told ToledoBlade.com that the company had provided several reasons for the delay, including mechanical problems, the unexpected complexity of the project, and various painting "issues."

"At this time, completion is unknown," said Pollick. However, ODOT hopes for completion by the end of the month, she told the news site.

ODOT is working with the contractor to get the work finished.

The bridge has been completely closed to traffic multiple times, and one of the eastbound lanes has been permanently closed for equipment staging.

Earlier this year, the Coast Guard permitted the shipping channel to be closed through March 15, to complete painting that required lowering of the draw spans, ToledoBlade.com previously reported.

That work was completed nine days late, partly because of record snowfall.

"It's a complex bridge. Any time you have a lift bridge, you have issues and complications that you don't get with other bridges," Pollick told ToledoBlade.com.

The Craig Memorial Bridge used to carry Interstate 280 over the Maumee River, but the interstate was rerouted on to the Veterans Glass City Skyway Bridge, a new cable-stayed bridge built next to the Craig to reduce bottlenecked traffic from the lift span.