Mother Nature is giving bridge coatings a run for their money in Canada, where a concrete overpass now owes its aesthetic to plants, not paint.

A living carpet of more than 100 unique plant species and 45,000 unique plants provides the visual appeal for the highway overpass in Surrey, British Columbia. 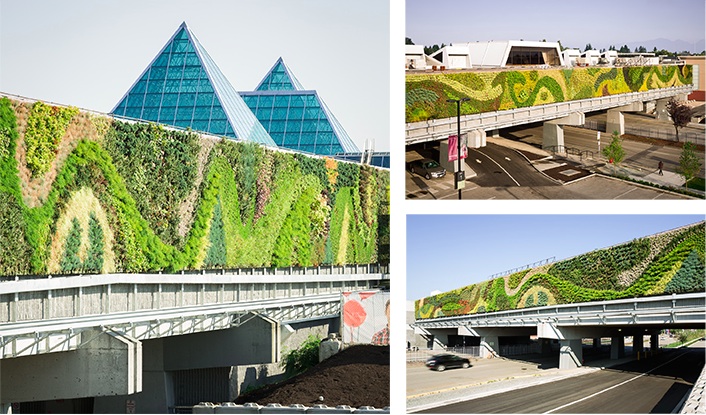 Green over Grey
The 10,150-square-foot living wall is the largest green wall in North America and the only one built over a roadway.

The installation, called “Mountains & Trees, Waves & Pebbles,” covers both sides of the overpass and incorporates 10,150 square feet of vegetation in all.

That makes it the largest green wall in North America—and the only one built directly over a roadway, according to Vancouver-based design firm Green over Grey, whose name sums up its architectural vision.

The installation is part of the $280 million redevelopment of the Guildford Town Centre, which opened in 1966. The redevelopment project began in 2010.

Inspiration for the project came from the mountain ranges and shorelines throughout the Western Canadian province, the company said.

Wave patterns represent rhythm and fluidity in the design, he added.

Founded in 2008, Green over Grey focuses on the creation of “spectacular and eye-catching green walls throughout North America.”