A two-month-old polyurethane gym floor is buckling at the $656 million New York City Police Academy project and may have to be replaced, reports say.

“The buckling is being blamed on a ‘cost saving’ decision to forgo installing a protective vapor barrier under the floor’s plywood base,” the New York Post reported this month, citing multiple sources. 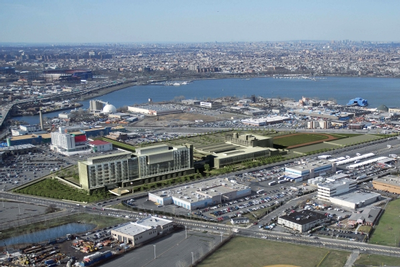 Photos: STV Inc.
The New York City Police Academy in Queens has been under construction since 2009. Issues with the gym's flooring may delay opening, reports say.

The flooring issue at the 45,000-square-foot gym will likely impact the opening date of the project, now set for January 2015, reports relate. The polyurethane flooring system was installed in August.

NYPD spokesman Stephen Davis told the New York Daily News that NYPD officials discovered the problem during a walk-through and alerted the city’s Department of Design and Construction (DDC).

“There was a defect problem with the new gym floor,” Davis said, adding that the DDC would address the problem with the contractors involved. Davis did not elaborate on how the issue might affect the project's timeline.

Neither the DDC nor the NYPD responded this week to requests for comment.

In a follow-up article on the gym floor, the NY Post reported that officials ignored the opinion of a consultant hired to evaluate the project.

Janos Spitzer, of Janos P. Spitzer Flooring Consultants Inc., told the media outlet that he had been retained to inspect the subfloor in January.

In a document, Spitzer wrote that the subfloor assembly was too springy and damp for the polyurethane surface planned, according to the NY Post.

The DDC, however, staunchly defended the project, telling the Post, “The subfloor is absolutely usable…Additionally, an analysis by DDC has found that the subfloor performed, and continues to perform, as designed.”

STV and Turner Construction Company, in a joint venture, are serving as the general contractor for the project on the 35-acre campus, near LaGuardia airport.

The first phase of the project, which was marked for completion in mid-2014, includes an academic facility, physical training facility, central utility plant, field house, running track and parking lot, according to STV’s website.

The company declined to comment, referring questions to the DDC.