The brilliant color of butterfly wings and beetle shells may just hold the key to producing a paint that never fades, according to researchers at the National History Museum in London.

The insects are covered with transparent, complex structures that reflect light in different ways, creating the vibrant colors that people see. 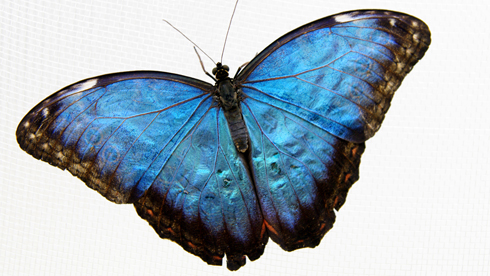 Photos: National History Museum
Scientists in London report that they have recreated a full wing of a Blue Morpho butterfly. The development could lead to a paint formulation that never fades.

Objects coated using this type of structural coloration could retain vibrancy forever, unlike those coated with pigments and dyes, the team says.

Now, the researchers report that they are one step closer to replicating the natural color phenomenon. The team announced Tuesday (Oct. 7) that it had successfully manufactured a butterfly wing in the lab.

The team’s research has been published in the journal Bioinspired, Biomimetic and Nanobiomaterials.

The cells that the team cultured in the lab to produce the wing were from the Blue Morpho butterfly, Morpho peleides, a striking tropical species that frightens potential predators by flashing its electric blue wings.

“These scales have desirable properties for industry, but are at present too challenging to make,” said Professor Andrew Parker of Oxford University, who led the research.

Such materials would also be much more environmentally friendly than traditional dyes and paints, which can release toxins into the environment, the scientists report.

The team said it cultured butterfly cells into a full wing of reflective scales; however, during the process of converting cells to scales, part of the original cell was lost, so that the cells could not be used to produce more scales.

What this means is that butterfly wing cells are not suitable for mass-producing everlasting colors, but the scientists believe that this could be possible with cells from other organisms, such as beetles.

Beetles, such as the weevil Metapocyrtus sp., which is found in New Guinea and Australia, also display structural coloration, but their color is achieved using a different kind of cell to the Blue Morpho.

The material the weevil uses to create the optical effect of structural coloration is the identical as that found in the gemstone opal, and can be made in any color, the researchers report.

Parker hopes to apply the technique he used on the butterfly wing to weevils’ cells, which are capable of producing an endless amount of colorant.

“This is only the beginning, but now that we understand the structure we could start to tweak it to get a different optical effect,” he told The Telegraph.

With a sufficient supply of nutrients and growth hormones, weevil cells could be used to make industrial quantities of everlasting paint, he notes.

In March, Harvard University researchers announced that they were working to recreate structural color on manmade materials.