Amtrak tunnels in New York City will require $689 million to repair corrosion and cracking caused by Superstorm Sandy in 2012, according to a new engineering report.

The 57-page report, "Structural Assessment of the Amtrak Under River Tunnels in NYC Inundated by Super Storm Sandy," was prepared by consulting firm HNTB Corp. 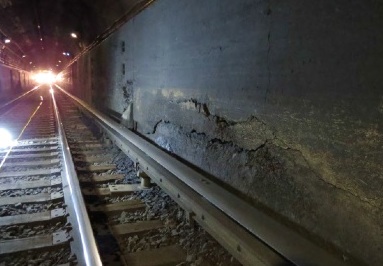 Images: HNTB Corp. report for Amtrak
Amtrak tunnels in New York City will require $689 million to repair corrosion and cracking caused by Superstorm Sandy in 2012, according to a new engineering report.

The report did not find any evidence that the tunnel linings are unsound, but it found that chlorides and sulfates cause, and are continuing to cause, significant damage to key tunnel components.

The report recommends a phased process to take individual tubes out of service for extended periods to perform repair work.

Amtrak said the new report underscores the urgency to advance the Gateway Program, which includes building a new, two-track tunnel capacity under the Hudson River.

Getting the new Gateway tunnel up and running is imperative to start rehabilitation work for both damaged tubes of the Hudson River tunnel, Amtrak said.

"Public awareness of the critical needs of the tunnels is important to build regional understanding of what must be done to provide current and future train service levels into New York," said Tony Coscia, Amtrak chairman.

"The Northeast region needs to make the Gateway Program a priority and we must get about the business of moving it forward as fast as we can."

According to the report, the most serious damage was found in the concrete bench walls, which are exhibiting "a significant number of longitudinal cracks, severe spalls with exposed steel, and corrosion of embedded steel elements."

On Aug. 19, a piece of bench wall fell on to the tracks, causing delays while emergency repairs were made, the report stated.

Amtrak maintained that the tunnels are safe for passenger train operations. "However, a permanent fix is required soon so that the tunnels remain available for long-term use by the traveling public," Amtrak said.

Amtrak said it is advancing the Gateway Program and plans to start the environmental review process as soon as possible while also developing a schedule to perform the work recommended in the report.

Repairs will require each rail tube to be entirely closed for about one year, the report said.

Stephen Gardner, Amtrak's vice president for Northeast Corridor Infrastructure and Investment Development, told The New York Times that the company's insurance should cover most of the repair bill.