A Vancouver-based design firm has blended nature with transportation in a green project high above a busy roadway in Surrey, British Columbia.

The project, “Mountains & Trees, Waves & Pebbles,” incorporates 10,150 square feet of vegetation, making it the largest green wall in North America, according to Green over Grey. 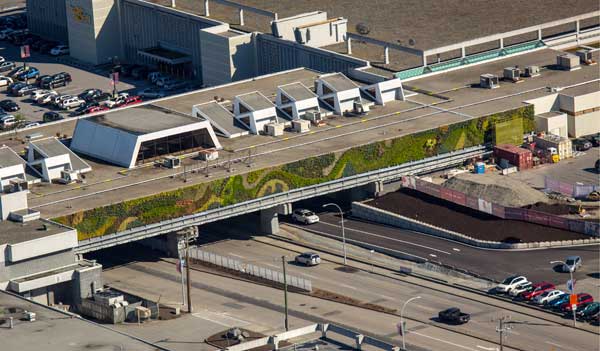 You can watch a time-lapse video of the wall’s installation below.

Inspiration for the planted project came from the mountain ranges and shorelines throughout the Western Canadian province, the company said.

He also noted that wave patterns represent rhythm and fluidity in the design.

Founded in 2008, Green over Grey focuses on the creation of “spectacular and eye-catching green walls throughout North America.” Its portfolio includes installations at Microsoft’s headquarters in Redmond, WA; Desjardins’ headquarters in Levis, Quebec; and international airports in Edmonton, Alberta, and Birmingham, AL.