A decorated World War II veteran is enjoying a much-needed facelift, thanks to a group of painters from New Jersey and a coating supplier.

The International Union of Painters and Allied Trades District Council 711 of New Jersey has volunteered painters and materials to paint the USS New Jersey, the most decorated battleship in U.S. history.

The so-called "Firepower for Freedom Restoration Project" on the 45,000-ton Iowa class battleship has been underway since Sept. 29 in Camden, NJ, the ship's home. 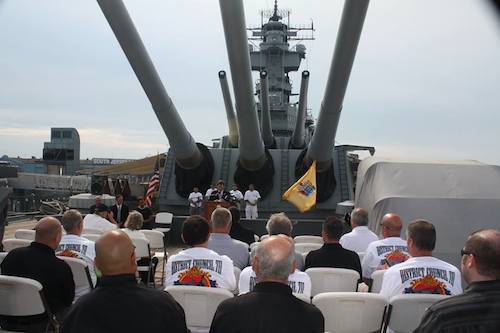 USS New Jersey (BB62) was built and launched in 1942 at the Philadelphia Naval Shipyard. She was decommissioned in 1991 and opened in 2001 as the nonprofit Battleship New Jersey Museum and Memorial at her current site.

Four painters, rotating in teams of two, are working on the ship, power washing and applying new base coats and top coats.

"We are just proud to do it and show support for veterans," union business manager Vinnie Lane told the New Jersey Courier-Post.

The Haze Gray coating system was donated by Sherwin-Williams.

Additionally, IUPAT is working with the AFL-CIO's Union Organization for Social Services on potentially identifying and hiring a local resident for repainting work.

The project "could not have come at a better time, as the ship's hull is in desperate need of painting," IUPAT DC 711 said.

Workers have already begun painting on the starboard side, NJ.com reported. Hanging baskets and boats will be used to paint the port side, which faces Philadelphia.

Neither Sherwin-Williams nor the battleship museum responded to requests for more information about the project.

The volunteers started removing old paint in preparation for the repainting. The crew also worked on improving landscaped areas near the visitors' center.

The painting project is expected to continue through the end of the month. After that, the ship is in for a new $1 million heating system and an $8 million repair and resurfacing of the ship's teak deck, NJ.com reported.

Those projects have been funded through grants, but museum officials are still looking for $22 million to dry-dock the vessel for hull repairs, the news outlet said.