Construction Deaths Back on the Rise

After six years of steady decline, U.S. construction fatalities rose by 8.7 percent in 2012, according to a new analysis of Department of Labor data.

Fatal injuries in the construction sector totaled 849 in 2012, compared to 781 in 2011, according to New Trends in Fatalities among Construction Workers, issued by CPWR: the Center for Construction Research and Training. 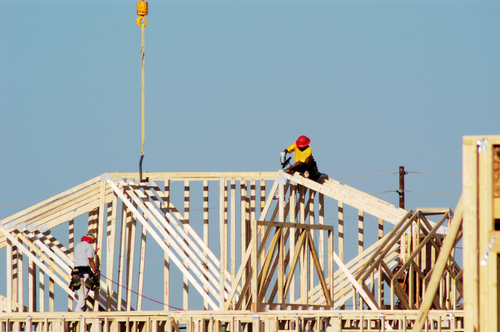 ©
The largest increases in construction fatalities were found among workers employed in residential construction, older workers, self-employed workers and roofing contractors, according to CPWR: the Center for Construction Research and Training.

Prior to 2012, the construction sector had shown annual declines since 2006, when 1,239 workers were killed.

Preliminary Department of Labor data for 2013 show a continued increase in fatal workplace injuries for construction, despite a dip in overall workplace fatalities. Final numbers for 2013 will be released April 2015.

Construction deaths accounted for 18.3 percent of all U.S. work-related fatalities in 2012, topping transportation, agriculture, mining and all other industries, CPWR reported.

Falls remain the leading cause of worker deaths on construction sites, accounting for 294 deaths in 2012, a 9.3 percent increase from 2011.

In residential building, 49 workers were killed in falls in 2012, an 81.5 percent increase over 2011, the report said. The number of fatal falls in non-residential construction dropped four percent in the same period.

Overall, most construction occupations in the private sector saw an increase in fatalities between 2011 and 2012, the report noted.

Older workers suffer more fatal injuries in the construction sector. The largest increase (26.2 percent) in fatalities between 2011 and 2012 was among workers ages 55 to 64.

Deaths among the self-employed increased 27.8 percent, compared to 4.4 percent for wage-and-salary workers.

The report is part of CPWR's ongoing surveillance of jobsite practices that affect the health and safety of construction workers.