Taking a cue from ancient masons, an architectural design duo has turned out an ultra-modern column that is both seismically stable and 3D-printed.

The Quake Column is the brainchild of Ronald Rael and Virginia San Fratello, the married founders of Oakland, CA-based Rael San Fratello and its subsidiary, Emerging Objects.

Using sand as the printing material, the six-foot-tall columns are comprised of interlocking pieces that diffuse the force of seismic activity, an architectural method based on Incan ashlar techniques.

Each "stone" is lightweight, hollow and numbered to designate its specific place in the construction sequence. 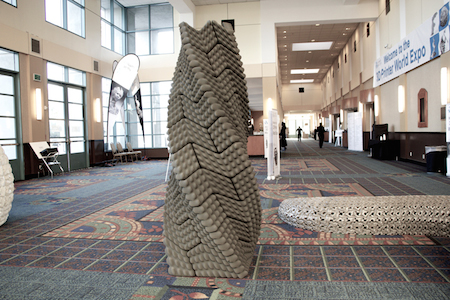 Photos: Emerging Objects
Using sand as the printing material, the columns are comprised of interlocking pieces that diffuse the force of seismic activity, a method based on Incan ashlar techniques.

The pieces also have handles so that they can easily be moved and placed into position.

"The interlocking stone of Incan structures creates an absence of resonant frequencies and stress concentration points," the website explains.

"The dry-stone walls built by the Incas could move slightly during an earthquake and resettle without the walls collapsing, a passive structural control technique employing both the principle of energy dissipation and that of suppressing resonant amplifications."

Rael is an associate professor of architecture at the University of California, Berkeley; San Fratello is an assistant professor at San Jose University in the School of Art & Design.

The team says its studio "disrupts the conventions of architecture by tackling topics not typically of interest to architects."