BASF has introduced an evaporation retardant and finishing aid for concrete that can help prevent shrinkage cracks as industrial flooring concrete dries.

MasterKure 111WB is a non-solvent-based, sprayable evaporation inhibitor for use during the intermediate curing stage of industrial flooring concrete, the company says. 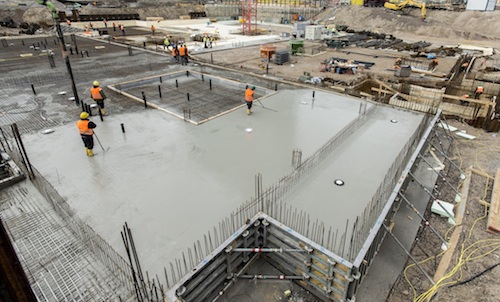 BASF
According to BASF, MasterKure 111WB takes effect a step earlier than conventional curing compounds and can prevent water film from evaporating.

The product is effective in combating rapid drying conditions such as high concrete and/or ambient temperatures, low humidity, high winds, direct sunlight and work in heated interiors during cold weather, according to the company.

According to BASF, MasterKure 111WB "takes effect a step earlier than conventional curing compounds—usually, these can only be applied onto the matt-dry concrete surface some five hours after placing."

The product prevents the water film from evaporating by forming a barrier of active-component molecules and reduces water evaporation by about 80 percent during the first four hours, compared to untreated concrete, the company says.

Additionally, the company says an "extremely thin layer" of the product on the surface works as a troweling aid by acting as a lubricant when treated with the power trowel later.