Hosting the ‘Super Bowl of Graffiti’

While many communities work to banish graffiti and its purveyors, one Midwestern city has opened its doors—or, at least, its floodwall—to them.

Graffiti artists from around the United States came together over Labor Day weekend for Paint Louis, an event that invites street artists to paint the 1.9-mile flood wall that protects downtown St. Louis. 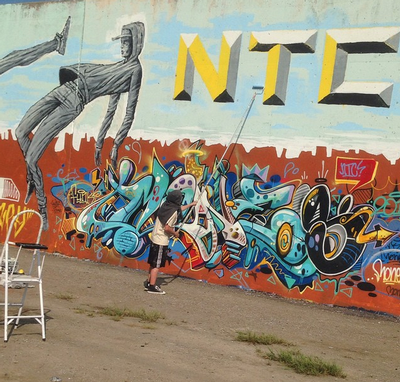 Images: paintlouis / Instagram
Graffiti artists from around the country gather in St. Louis over the Labor Day weekend for Paint Louis, which invites artists to paint the city's flood wall.

The event is in its second year after a decade-long hiatus. This year, one artist and original organizer of the event traveled from Minneapolis to participate.

“Oh, it is a joy to paint with graffiti crews from all around the country that you see in magazines and hear about on the Internet,” Jona Anderson, also known as Stun1, told St. Louis Public Radio.

The original Paint Louis ran from 1995 to 2001, but was then shut down because too many artists painted in unsanctioned areas.

Local organizer and promoter John Harrington knows the event may not flow smoothly.

'Rebels in their Own Right'

“You know how graffiti artists are; they’re rebels in their own right,” he told St. Louis Public Radio.

“That’s what I worry about with this event. Some of these guys get up hardcore all across the country and all across the world. And they don’t want their faces seen. So when the cops say we need everybody's name written down and their government name, I’m like 'That’s not possible, man.'”

Even with the tension, Harrington hoped people would see that it was art.

“I want to see people who don’t really understand what it is to come down and see that it’s art,” he said.

“A lot of people don’t understand what the difference is between graffiti and tagging. They think it’s all this scribble-scrabble. But you’ll see by the end of this event, it’s going to be great art, great murals, great pictures.”